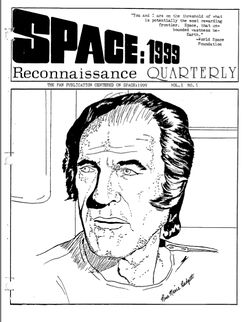 Rose Marie Badgett is a fan author and artist whose works have appeared in a number of zines and publications from the 1970s to present.

She also served as a fan club president and con chair of several conventions.

Many of Badgett's works are centered on Barbara Bain and Martin Landau, whether it is in Space: 1999, Mission: Impossible, Savage, or Harlem Globetrotters on Gilligan's Island (commonly referred to as "J.J. and Olga" stories).

However, she has also written for other fandoms as well, including Beauty and the Beast.

Her B&B work has appeared in Light and Cloudshadows, Tunnels of Love, and A Distant Shore (Beauty and the Beast zine).

She served as President of the International Space: 1999 Alliance, the largest and longest-lived Space: 1999 fan association, from 1985 to 1993. The Alliance was a Space: 1999 fan club that sponsored letter campaigns, published the newsletter Main Computer, held numerous fan-run conventions, and worked to support "all Gerry Anderson productions."

Badgett chaired several successful Space: 1999 conventions, each raising funds for a charitable cause: