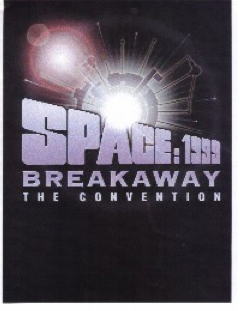 Cover of the con program

Breakaway: The Convention was a Space: 1999 con sponsored by the The International Space: 1999 Alliance. It was alternately known under the title of SpaceCon XIII.

It was the last official convention sponsored by the International Space: 1999 Alliance.

Breakaway: The Convention took place in Culver City, CA, from September 10-13, 1999, the exact dates in the pilot episode of the series.

While the con was scheduled starting on September 10, most attendees arrived and held informal gatherings on September 9, the date upon which Commander John Koenig (Martin Landau) arrived as Commander on Moonbase Alpha.

September 13, 1999, was the final day of the con which was fitting given that, in the pilot of the series, the Moon was blasted out of Earth's orbit on the same day. September 13th also marks star Barbara Bain's birthday.

The con program contains 16 pages. It has color covers and a graphic by Roberto Baldassari. It includes profiles of the guests and the article, "99 Ways to Tell If You're Really a Dedicated Space 1999 Fan."

The post-con report was published in 2000. It contains photographs of guests and attendees, art show winners, information about past conventions, a script to the fan-made movie, "Message from Moonbase Alpha" by Johnny Byrne, and a play, "What's It All About?" by Alice Newsom. This play was originally a musical called "What's It All About Alpha?" in Peripatetic #2.

Barry Morse and Barbara Bain starred in a production of A.R. Gurney's famed two-handed stage play Love Letters the evening of Saturday, September 11th, in the hotel's main ballroom. The performance benefited the con's two designated charities: Parkinson's disease treatment and research and BookPALS. The play program was three pages in length (the back cover is blank):