From Fanlore
(Redirected from Mission: Impossible)
Jump to navigation Jump to search 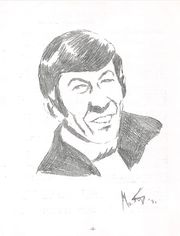 Mission: Impossible was a spy TV Series on CBS, originally from 1966-1973, based on the operations of the Impossible Mission Force (IMF), a covert US government agency. One of the stars was Leonard Nimoy, and there is much about this actor/character in The Nimoyan.

There was a remake running from 1988-1990 (sometimes called The New Mission: Impossible), which included remade 60s scripts in an attempt to thwart a prolonged screenwriters' strike, and most recently between 1996 and 2024 a series of eight live-action films with Tom Cruise. There are also video games based on the franchise.

The most common tropes in all versions of the franchise are self-destroying messages, disguises (often using undetectable masks) and deception. Episodes of the TV show usually began with the team being briefed on a problem and putting together a plan, then following it through and dealing with any problems. They typically ended with the stars watching or leaving the scene and removing their disguises as their plot come together and their enemies started to fight amongst themselves as a result of their machinations.