This Zine Will Self-Destruct.....

From Fanlore
(Redirected from This Zine Will Self-Destruct)
Jump to: navigation, search

This Zine Will Self-Destruct..... is a gen 89-page Mission Impossible anthology. 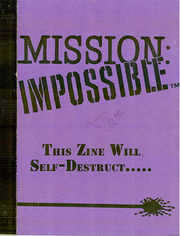 From the publisher: "Collection of stories, poems & etc based on (New) Mission: Impossible. Some stories previously published in Merlin's II, but with the addition of new stories - including a Mission /Simon & Simon story: Father's Footsteps - A.J. Simon sets out to find out just who Jim Phelps is and what he wants with Rick. Broken Promises - Barney and Grant Collier each deal with the death of a loved one. The Return of the Assassin - Matthew Drake is back - with a vengeance! Statute of Limitations - The team is ordered to find a cache of stolen cash before a terrorist does. Things don't go easily though, the cash vanished years earlier and the hotel they're searching seems to be haunted. Fault Line - Not even Jim Phelps could predict the earthquake that occurs during their mission to rescue a kidnapped teacher and his pupil."