Cosmoconnection is a gen anthology of stories and articles about Star Trek: TOS, Space: 1999 and The Prisoner. It was the first Space: 1999-related fanzine published. 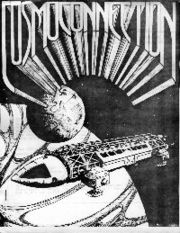 Cosmoconnection 1 was published in July of 1976 and contains 52 pages. The method of reproduction was ditto and offset.

"Cosmoconnection is a unique offering of both "Star Trek" and "Space: 1999" with a tiny bit of science fiction thrown in for good measure. To my knowledge, it is the only fanzine present to offer both Star Trek and 1999 fiction. The major portion of this 'zine is made up of two 1999 stories. The first was "Unshielded" by the editor, Ms. Delitsky. Alpha has entered a field of space which is causing madness among the Alphans. The problem is finally solved by Prof. Bergnan. An intimate scene between Helena and John appears in this story, while John is under the influence of the field. The next story is "A Perfectly Reasonable Solution" by John Petty. Alpha is due to be destroyed, though unintentionally. The aliens behind it, do not consider the Alphans worth sparing, preferring to let them perish. To save Alpha, John, Helena, Victor, Alan, Paul, and Sandra must pass a test suited to the individual. They pass with the aliens willing to save Alpha. No final solution is present however, and the story tends to leave one hanging. There are a few minor flaws, one of the most noticeable being Alan Carter's use of his "metal belt buckle" to escape from his "test." For Star Trek, There is "A Different Way of Thinking", also by Ms. Delitsky. It concerns a new kind of "love" between McCoy and Natira. It originally appeared in Warped Space #13. There is a commentary on '99 by [ Sharon F ] (which originally appeared in Turnabout #1), an article on the editor's meeting of Leonard Nimoy after seeing the Sherlock Holmes play, some humorous stories, both Star Trek and Science Fiction, and a '99 trivia quiz, as well as a beautiful cover by Rodney Allen, with some illos by Aaron McClellan scattered throughout. "Cosmoconnection" is worth having, and is sure to improve as time goes on. [1] 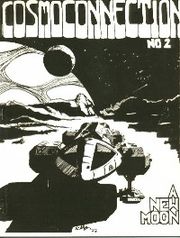 Cosmoconnection 2 was published in January 1977.

"Rescue", by Thomas De Beduewe, is a tale about a rescue ship contacting Alpha for the purpose of rescuing the Alphans and taking then back to the Earth of the year 2371. The Alphans become suspicious as their rescuers' answers to certain questions don't ring quite true and they soon discover the true identity of their rescuers. The story is very well written, the plot is well woven, and the action flows smoothly. It's an enjoyable story with a lot of exciting action near the end climax. "The Day John Koenig Fell Down", by Ed Salmon is a '99 story written in a Monty Python vein. The insanity of the story is something you have to experience as you read it. It's very funny and sure to appeal to anyone who likes humor in the Monty Python tradition. In this issue is the first segment of an adaptation of the first season episode "Earthbound" written by Anthony Terpiloff. The adaptation is done by Ted Kruschak and is very well done. My only complaint is that we are given such a small portion of the story before we reach the words "To be continued..." "The Great God Kano" is by the editor and concerns Koenig's reaction to what seems to be a base wide mutiny during an alien attack. The story is good with an ending that is beautifully done and gives the story a nice humorous twist. "The Alpha Tapes", by Ted Hruschak, is the first in a series of interviews with various Alpha crew members done by a visiting alien. Nicely done with some food bits of humor thrown in. "A Dream Called Earth", also by the editor, is a story centering a-round Victor Bergman. It is a touching story exploring Victor's thoughts and feelings as he thinks back about his days on Earth. it shows us how really lonely Victor feels as he thinks about his late wife. The characterization and character interaction is very well done and makes for a very enjoyable story. The artwork in this issue ranges from fair to good with art contributors including Rodney Allen, Lynn McCreight, Ray Lamb, Carl Lamb, Aaron McClellan, Marty Siegrist, and Kathy Stear. The cover by Allen is especially nice as is his picture of the interior of the eagle which accompanies the "Earthbound" adaptation. All in all this is a very nice 'zine with good stories, good artwork, and good printing. Recommended for any 1999 fan. [2] 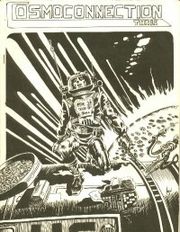 Cosmoconnection 3 was published summer of 1977 and contains 52 pages.

Thia issue of Cosmo contains only two pieces of fiction this time around but both are very well done and quite enjoyable. The first piece is "A Bond Beyond". This a SF story about one  astronaut's fight to stay alive and return to Earth after having sur vived a near fatal collision with a meteor which has killed the rest  of the ship's crew. The story givea a very realistic view into the  man's thoughts while alone in space. The astronaut then comes in  contact with an alien life form who may hold the key to his final survival, but it would not be survival without a price... The second piece of fiction in the 'zine is the second half of Ted Hruschak's adaptation of the first season 1999 episode "The Earthbound". This adaptation (the first half of which appeared in Cosmo #2) follows very closely to the original dialog of the episode and is quite enjoyable. Ms. Delitsky's editorial this time is quite interesting. It is a detailed report of what happened during her trip to England where she met n number of the 1999 stars. Four photos accompany the editorial. Artwork in this issue varies from good to very good. The story "A Bond Beyond" is very wall illustrated by some fine Aaron McClellen work. "Earthbound" is illustrated by an illo by Rodney Allen and an illo by Kathi Lynn Higley. All in all, it's a good 'zine. Format could use some tightening in some places but overall it's a nicely done 'zine. [3] 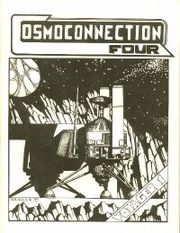 Cosmoconnection 4 was published fall of 1978. 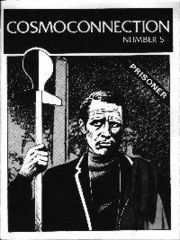