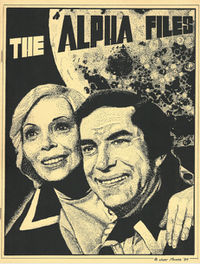 Cover of The Alpha Files, cover art by Judy Moore

The Alpha Files is a gen Space: 1999 short story collection of fan fiction by multiple authors edited and published in 1985 by Tony Wynn under the Reconnaissance Press imprint.

It features four stories based on the Space: 1999 television series. The are: 'Total Eclipse" by Terry S. Bowers; "Water" by Janet Walker; and "They're Only Deadly While in Your Body" and "The Master of Ist", both by Rebecca Eisenhuth.

The cover art is by Judy Moore and was acclaimed by fans of Space: 1999. Additional interior art is by Rebecca Eisenhuth.