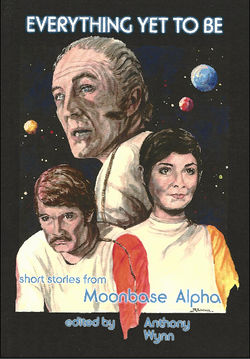 Cover of Everything Yet To Be with Victor Bergman, Paul Morrow, and Sandra Benes; artwork by Robert E. Wood

Sandra Benes was a supporting character during Year One (Season One) of Space: 1999 and is seen in all 24 episodes. She returned for 11 episodes in Year Two (Season two) and is often referred to as Sahn. She was portrayed by Zienia Merton.

She is usually seen at her Main Mission/Command Centre desk, working on communications or scanners and sensors. She is sometimes assigned to missions, such as in episodes Matter Of Life And Death, Black Sun, The Full Circle, Missing Link, The Last Sunset.

Sandra is often placed under great emotional stress, but recovers her wits and composure quickly (she is blinded in Matter Of Life And Death, she faints at the death of her boyfriend in Black Sun, she is captured and tortured by cavemen in The Full Circle).

Sandra returned some 25 years later in the short film Message from Moonbase Alpha, a seven-minute fan-production starring Zienia Merton, scripted by Johnny Byrne, and directed by Tim Mallett. The film also featured clips (including Merton and various other actors) from the Space:1999 television series. It debuted at the Breakaway convention in Culver City, California on September 13, 1999. It has been embraced by fandom and dubbed the "49th episode" by fans of the show.

An early zine The Meeting Point contains fan interviews and fan fiction where actress Zienia Merton meets Sandra Benes. Various other fan fiction stories feature Sandra (Sahn) Benes. The fanzines Everything Yet To Be, The Alpha Files, Moonscape and The Return of Victor Bergman are all gen Space: 1999 short story collections of fan fiction by varied authors that include the character of Sandra.