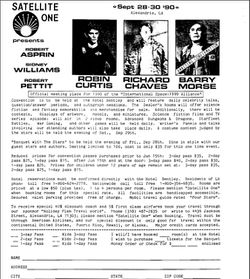 Satellite One was a one-time, for-profit convention with celebrity guests Majel Barrett Roddenberry and Richard Chaves.

Roddenberry stepped in at the last minute to replace Robin Curtis and Barry Morse, who both were unable to attend due to respective filming commitments. As a bonus, Roddenberry brought merchandise from her Lincoln Enterprises mail order service.

Due to the absence of Barry Morse, members of the International Space: 1999 Alliance did not travel to this event.

Days before the convention, co-chair Tony Wynn was deployed with his military unit to Saudi Arabia in support of Operation Desert Storm.

The convention was staffed by fans and supporters who had little to no experience in con operations. However, they made a valiant effort at organization and attendees overall had a good time at the event. 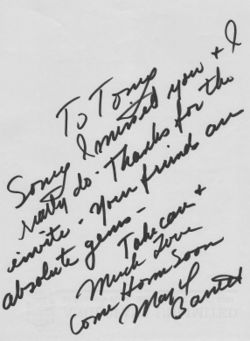 Barrett wrote a special message to Wynn, transmitted by AT&T "Desert Fax", to his unit in the Middle East:

"To Tony, Sorry I missed you & I really do. Thanks for the invite - your friends are absolute gems. Take care & much love, come home soon - Majel Barrett

"Depravity at Satellite One? The hot tub got crowded, and there was an alligator in it, and some eyeballs (they float really well -- they're the ones Richard [Chaves] juggled). If you must know all the dirt, I ended up looking like Laura Palmer (TWIN PEAKS) after she'd been fished out of the river; that's what four hours in a hot tub can do. I think we had somewhere around a dozen or so people squashed in or around at one point, and yucko, the water really looked like pond scum by the end of that period. But we all had a great time talking about everything imaginable. Someone who'd had a TWIN PEAKS party brought down a cherry pie around 2 a.m. one evening, and a CD player. There is really nothing nicer than being outside late at night, stars in the sky, with gentle New Age music playing, no bugs biting (that is, when there's room in the Jacuzzi to just lean back and relax)..." Satellite One was a lot of fun, even hiking up the steps was fun (I rationalized that it was very good exercise that I needed, which I did). There were times I thought the con was not the best run of functions, but I learned a while ago that if a con goes sour, it's up to you to make h fun."[1]

"Taken as a given that the guests were great, it was an interesting con. The hotel was one of those gorgeous turn-of-the-century block-long palaces — chandeliers and a marble fountain in the lobby. Con security was a bit overzealous (who ever heard of a con security team refusing to list even the head person's name in the program? What is this, Mission: Impossible?) but it was a first con and apparently about half their staff, from the nearby Army base, had been shipped to Saudi Arabia. The elevators ("A year older than dirt," one staff member said) were an experience, too. We were lucky to be on the fifth floor, within climbing distance. This intermittent aerobic exercise had a side benefit -- it helped burn off the hotel food, which was surprisingly good. The "banquet with the stars" was arranged as though someone expected us to behave like teenyboppers at a New Kids concert -- a table 'waaaay at the front of the room, with the fen at a "safe distance" across the dance floor... but Richard and Jack Crain ruined the "untouchable" effect by coming around to all the tables to visit, and never got mugged once. (Hugged, occasionally, but they were tough enough to withstand such abuse.) Agnes Chaves, Richard's mother, came to most of the functions and hung around in the lobby for a while. Neat lady. The scheduled Trek guest, Robin Curtis, was a last-minute no-show, but Majel Barrett came. Fen were polite enough (at least at the presentation I attended) not to ask her when we'd see Ironhorse on the Enterprise. (It's been done in zines, anyway....) The birthday party presentations, including the "this is your life, RC" skit, have been preserved on tape. If you weren't at the con, try to get a copy -- Mr. Chaves being menaced by a belly dancer is truly a sight to behold."[2]