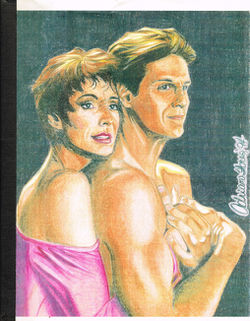 Adrian Flores is an artist and illustrator who has provided numerous pieces of artwork for an assortment of fanzines.

These include such fandoms as Twin Peaks, Star Trek: Deep Space Nine, and Star Trek: The Next Generation.

Flores hails from the small coastal town of Palcios, Texas, and has lived in various cities throughout the Lone Star State, including Houston and San Antonio.

Flores' interest in Deep Space Nine and The Next Generation, and particularly the characters of Kira Nerys and Beverly Crusher, fueled his contributions to fandom as an artist.

Over the years he has worked in various mediums, including ink, pencil, and watercolor.

He has provided illustrations for publications including Nine, Secrets of Twin Peaks, The Beverly File, Asbestos Envelope, Bedside Manners, and Deep Spaces. His work has also appeared on numerous publicity posters and pieces of signage.

In 2016, Flores married author and fellow fan Anthony Wynn in a ceremony held in Yachats, Oregon. They currently reside in the Hill Country of Central Texas.