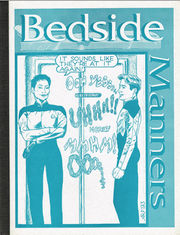 From the title page, by the editor:

There is a great need for imagination in today's world. It seems the passion is often drained from people's lives.

This is a place where that imagination is rekindled and celebrated. Within these pages, you will read adult stories where the passion doesn't end prematurely.

I hope you have as much fun reading them as the writers and artists had breathing new life into these characters.

This isn't something for everyone, but if you are a Beverly Crusher fan, it is for you.

There is passion here.

So sit back and enjoy!

From the title page, by the publisher:

Contents copy right April 1994 by Daniel Van De Wiele for the individual contributors. No portion may be reproduced by any means without the individual creator's permission. This is a not-for-profit fan publication and the copyright is not meant to supercede [sic] any official copyright holder of Star Trek. Don't kill off fanzines by supporting those who claim to do you a favor by pirating fanzines!

Story Afterward for "The Necessity of Pain"

This story has a rather complicated genesis, as many story collaborations between Sheena and Marina do. One thing we definitely believe is that in Star Trek one can write anything. One can do straight science fiction as seen in episodes like Contagion, Conundrum and The Next Phase, one can do stories dealing chiefly with emotions like The Host or The Outcast, one can take themes and ideas from long ago (such as Robin Hood or Sherlock Holmes) and use those, one can do war stories, peace stories, love stories, and combinations thereof. The Star Trek format is so wide that writers could literally never run out of ideas. But we believe that the best story balances an emotional issue with a suitable plot. And on to the plot of this story...

It was Sheena's idea for Beverly to be kidnapped by the Orions and sold on the Orion slave market. It was Marina's idea for Beverly and Jean-Luc to be kidnapped by David Warner's Cardassian character and tortured. In retrospect, this story has many elements of hurt/ comfort, but there are obvious differences, such as the fact both characters are hurt in some way by, and also comforted by one another.

People who have been reading our stories since the beginning will realize a distinct pattern in the way in which we treat poor Jean-Luc Picard! The man is always having something done to him. In one story he managed to get pon fair. In another he ate something he shouldn't have and went cuckoo. In yet another an allergy played up, making him lose his inhibitions.

Even in the series itself, Picard suffers. In Sarek he cries. In Allegiance his doppleganger behaves strangely. In The Inner Light he's someone else altogether. In The Best of Both Worlds the Borgget him. In Family he breaks down and cries. One is forced to conclude Picard is a prime target for this sort of "writer abuse" because of the way he is normally.

The man is always cool, calm and collected — always utterly dignified — and it drives the audience crazy. Saragh put it nicely by saying that Picard is "emotionally constipated." Good term. In that way Picard is just as fascinating as Spock. Writers feel compelled to delve beneath their stoic exteriors to find out what is going on underneath. In order to do that, we perpetrate the most horrible things on the poor characters! We're not obsessed with pain or torture or other weird goings-on. We're just of the opinion only pain, torture and other problems of that nature will bring out Jean-Luc Picard's other side.