Issues were word-processor printed, photocopied, and hand-stapled. An ad by the publisher in Datazine #57 describes it as "sleaze on a shoestring."

This zine required an age statement to purchase as "these stories are for grown-ups."

Asbestos Envelope 1 was published in 1989 and contains 50 pages.

Asbestos Envelope 2 was published in 1990 and contains 56 pages. 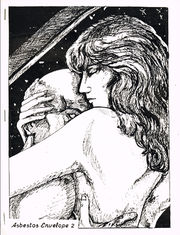 front cover of issue #2, Barbara Caldwell, see NCC-1701-D #4 for another fanwork in this series

"For all you P/C aficionados, here's take two on that sleaze on a shoestring from the Beverlyophiles." 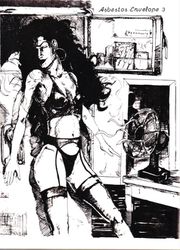 Asbestos Envelope 3 was published in 1990 and contains 87 pages. 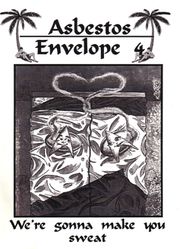 Asbestos Envelope 4 was published in 1990 and contains 54 pages.It contains both het and slash.

From the editorial: "Welcome to your latest injection of hot sex... I remember how I was introduced to this type of fan-friction. Lillie Deans had a book she lovingly called, 'The Binder.' That book had in it a story about a little triste between Jean-Luc Picard and Beverly Crusher called 'I get no kick from Champagne.' After picking my jaw up on the floor, I was hooked. Now, I find myself putting together the 'zine that was started as stories between two friends."

key to some sex stuff from issue #4

Summaries for stories come from the zine's table of contents: