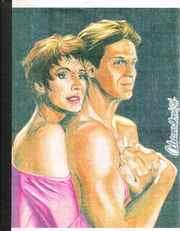 It has a front cover by Adrian Flores.

The zine required an age statement to order.

Some story summaries: "The blanket on Kira's bed doesn't feel quite normal and she wonders if there is a problem with the replicator. Dr. Bashir must rescue a Vulcan/Deltan hybrid in Pon Farr; Cisco/Kira. Kira/Bareil, Bashir is attracted to one of Kira's friends ..."

I just couldn't, just could not resist doing an adult zine again. There must be something in the water. Actually, I think there was something in Star Trek: Deep Space Nine ~ the characters. Characters so infinitely interesting I wanted to explore their lives far beyond that weekend hour in which I peeped into their world. Characters so well-written (at least, at the time) that I found what I saw each week so satisfying that the only stories I could think of to write involved the exploration of something that would never be dealt with in any depth, if at all, on the small screen: their sexuality. As the tales in this zine will illustrate, I wasn't alone in my thinking.

My credo as an editor of erotica is — if it turns the writer on, it will turn the reader on. Arousal was my sole criterion for accepting submissions. As each of these stories easily passed the patented Kimberley Junius Hand-Tingle Erotica Test... well, all I can say is, make sure you lock the door to your room before you start reading.