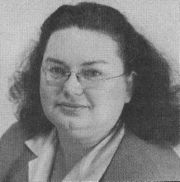 She was a Fan Guest at Trekkon '83 in San Antonio, Texas.

Syn was selected as the Kiscon Guest of Honor in 2015.

The Highly Influential "Courts of Honor"

The zine, Courts of Honor, is perhaps Syn's most visible and influential work. It generated much fannish discussion both due to its long production history and numerous delays, as well as the content itself.

In 1982, Syn was nominated for a FanQ Award and she submitted a brief bio to The Annual Fan Q Awards Nominations Booklet.

Excerpts are quoted below:

Biographically speaking, I'm a relative newcomer to fandom. When I read the first New Voyages I had a dual reaction. I loved it--and I thought I could do better. Such delusions have initiated many a first novel. I wrote mine and sent it to Carol Frisbie who responded with a post card I still cherish--"Tried to call you but no number. Mrinn should be submitted professionally. Call me." I did, and Carol held my hand through Bantam, through Pocket Books, and Paramount--and wailed with me when Paramount turned Mrinn down. When Jackie Bielowicz published Mrinn in 1979 I didn't even know what an LoC was.

I've confined my production to Star Trek (although tempted by S/H), following Mrinn with two short stories, Freedom is Standing in the Light, and Valley of Shadows in Carol Frisbie's SUN AND SHADOW. Freedom got me nominated and voted "Best Writer ' 80" in INTERSTAT's Trekstar awards. It's absurd to say that story wrote itself, but it did. If all my production was Star Trek, half of my Star Trek production was, and remains, erotic. The Price and Taaz Avine in THE PRICE AND THE PRIZE which I co-edited with Gayle F. "You draw it and I'll write it. Sweetheart," gave me the chance to define male sexuality in my terms. Since men have been writing about women for centuries (be beautiful, be pure, be passionate), I thought it was time for the ladies to have their say. Be beautiful, fellas, be passionate, but pure--and, of course--be gentle.

Bio from the "Trekkon '83" Program Booklet

In 1983, Syn was a Fan Guest at Trekkon '83 and the following bio appeared in the convention program booklet:

"Syn Ferguson is a freelance writer from Eugene, Oregon. She specialized in How-To articles she claims to research by finding out how not to first. Her work has been published in Executive Review, Public Relations Quarterly, NRTA Journal, Essence, and Reader's Digest.

The call for manuscripts at the end of New Voyages brought Syn out of the closet to write a short story and it turned into a novel. Bantam was interested until they lost the Star Trek franchise. Pocket Books was interested, but Paramount said 'No.'

Syn noted, 'Carol Frisbie helped me find a fan editor to bring out Mission to Mrinn and later published the short story for which I won the Trekstar Award. The enthusiasm of the fans has kept me involved ever since. No paying editor ever offered to mow my lawn so I could keep writing.'

'Being snoopy, pushy, and willing to try anything' has taken Syn in and out of a variety of jobs 'from cook to kennelmaid.' She has worked as a reporter, venereal disease investigator, and in public relations and advertising."

Some of the zines she contributed to