You may be looking for the Digimon doujinshi Heat Wave. 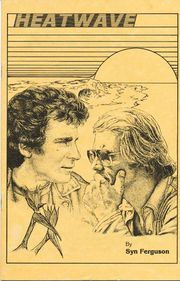 Heatwave is a slash Starsky and Hutch 21-page novel by Syn Ferguson. The cover artist is Caren Parnes, it was edited by Beverly Sutherland and it was proofread by Flora Poste. Aside from the cover, it contains no other art.

On the back page: "Any proceeds from this publication will go toward the effort to print Courts of Honor."

Amazingly hot getting together story with glorious descriptive imagery. Also a Hutch that gets the shit kicked out of him, poor thing. [1]

Heatwave, a first-time story with a lot of familiar elements--but when the story was written they were a lot less familiar, and the writing makes them new again. [2]

The only two S/H zines that I have read are HEAT WAVE and PUSHIN' THE ODDS. I wasn't particularly impressed with either. HW was very flat and almost completely devoid of drama. PTO was better, but very hard on the eyes, and I didn't really care the the way everything tied into the final episode. [3]

I want to make clear that I don't dislike the sex scenes, I love them! Just the proportion isn't always right, for instance, Heatwave, by Syn Ferguson is, in my view, a disaster, since the characterization of S/H, which led to the endless sex scene seems perfunctory and totally inane (Can that really be the same person who wrote Courts of Honor?) [4]

On comparing "Heatwave" and Courts of Honor, well, I wasn't that crazy about either one of them... Heatwave was short on plot and long on sex, and about the same as others I've read, but I would have liked it more if the sex had pushed my buttons. [5]

For anyone who doesn't know, "HeatWave" is an *excellent* story. It transcends its characters names; it's a slash story that anybody (well, anybody who likes first time, not-quite-martyrdom stories) would love. [6]

Heatwave, one of the best first time stories in the fandom. [7]

The heat is unbearable. The hour is late. And Hutch is not in a good situation. A bloody and beaten partner falls into Starsky's apartment as Johnny Carson drones on in the background. The way he got himself into that state is something of a revealing factor between the boys. Looking for a replacement doesn't always satisfy. [8]

I loved this story so much that years later, I took another slash fan to Rosarita for lobsters (though we had champagne instead of white wine). [9]