From Fanlore
(Redirected from Sun and Shadow)
Jump to: navigation, search 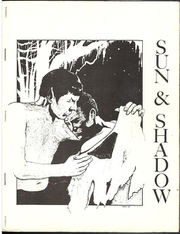 Sun & Shadow is a gen and pre-slash h/c 213-page anthology fanzine published in 1980 by Pulsar Press. It appears on a number of slash zine lists, an example of fans' differing definitions of the genre.

One of the stories, "Freedom is Standing in the Light"[1] by Syn Ferguson is recognized by many fans as "the best piece of fan fiction ever published."[2] A review in Universal Translator (1981) called it "gut-wrenching ...heartbreaking ... [and] unforgettable ....The lyric quality meshes with the legend-like aura of the tale."

Sun & Shadow deals with the friendship/love between Kirk and Spock within the "hurt/comfort" format. It is not a balanced genzine, but a dramatic excursion into a specific and esoteric theme. Given the vast and loving attention we bestow upon these two characters and the unique beauty of their relationship, it is not surprising that the hurt/comfort treatment in stories and fantasies is so prevalent: tragedy in drama frequently provides the best (and sometimes only) way to relate the deepest and most guarded feelings of a character, those feelings/thoughts that are kept carefully private in the mundane, normal routine of life. Hurt/comfort is a device, a useful tool enabling us to explore the inner workings of the private self. And, significantly, not only of our characters, but ourselves as well.

Sun & Shadow does not examine the psychological meanings and components of the hurt/comfort theme itself—it would take a very long and involved treatise to do that. But it does examine the psychology of a relationship through fictional means and in a very serious way, and the going can get pretty heavy at times. Do yourselves, and especially the writers, a favor— read Sun & Shadow slowly, savor the stories and give each its due. Consumed in haste, an emotional overload could occur, and much would be missed. And Sun & Shadow, thanks to some of fandom's finest writers, contains some of the best fan fiction this editor has read. (If "Freedom is Standing in the Light," to mention just one, does not move you to the core, perhaps you are emotionally comatose . . . . )

But the stories and poems speak for themselves, and the artwork that accompanies them enhances and adds a valuable dimension to the written word. My sincere thanks to the artists represented herein, for their talent and their professionalism.

See reactions and reviews for Freedom is Standing in the Light.

See reactions and reviews for Valley of Shadows.

See reactions and reviews for The Soulless.

See reactions and reviews for The Logical Time.

See reactions and reviews for Who'll Stop the Rain?.

See reactions and reviews for Point of Know Return.

See reactions and reviews for Song of My Soul.

See reactions and reviews for The Mourner.

See reactions and reviews for Another Man's Poison.

[zine]: A few words about the zine as a whole first. I guess this is considered pre-K/S. No sex, lots of love and devotion, but mostly hurt/comfort and tons of anguish and grieving. Maybe this is one of the zines Jenna was talking about last issue that spurred a movement toward happy-ending stories. Just about the whole zine is bummer stories, looking at Kirk or Spock after the other has died, etc. I only want to say a few words about this story [Another Man's Poison]: it has to do with peanut butter. And not for any kind of tasty/sticky love-play, either. But there's a good story behind this, Kirk and Spock running into Klingons on a primitive-society planet. A clean, clear plot and well-drawn characters; and then the peanut butter. Very rich in the beginning, how Kirk felt about Spock when he first came aboard, and how their closeness developed. But otherwise, not enough K/S feeling in this story or even good H/C. I just had to do an LOC, though - I mean, I'll always remember the story about peanut butter.... [4]

[zine]: Perhaps not by design, a 'shadow' in this zine is one of its suns. 'Valley of Shadows' by Syn Ferguson, is an excellent metaphysical, near-mythological treatment of the Orpheus and Eurydice theme: the man who deals with the keeper of Hell's gates in order to reclaim the soul of his beloved. From battle with a space monster, Spock has become a vegetable; Kirk takes him to the Valley of Shadows where a Vulcan telepath healer ostracized from her planet because of bastardy offers to return Spock's sanity, but at the price of becoming his wife. This is a common plot in fandom and an old one in general, but Ferguson makes good use of it; the loss is real; the confusion over accepting hope is real; the knowledge that if Spock does come back, he is still lost to Kirk, is real There's not a great deal of action in the piece, but the tension and the characters' vibrancy obviate the need of it. An outstanding piece. There's a great deal of action, as well as tension and vibrancy, in Diana King's '... Another Man's Poison.' Kirk and Spock investigate a plague of locusts on Theta Felista, run into native arrows and Klingons, face torture and Certain Death till the Enterprise can find them again... it's a ripping yarn, with well-drawn, well-balanced, interesting characters, and an intelligent use of a plot point that in lesser hands would have been ludicrous. This is not to miss. King knows her anatomy, psychology, catastrophe theory, and classical allusions, giving the story several levels of enjoyment. 'The Soulless' combines themes of alternate universe, t'hy'la, and star crossed soulmates. Where it is good is in defining the alternate Kirk and Spock; they are recognizable as cast from the mold of our heroes, with the shift of focus that comes from the differing emphasis of their societies. Where it is not so good is in the inability of those characters to rise above their society's training when they confront each other -- 'our' Kirk and Spock could. Maybe the ending was meant to be a tragic irony, but to me it came off only as mutual idiocy, that though they recognize their mutual soul bond, they still let each other bleed to death. 'The Logical Time' claims to set up the events that led up to Spocks' leaving the Enterprise to study logic on Vulcan. The story is not badly done; every plot point is there that should be there, and none are there that shouldn't, except for a certain soppiness in Kirk and Spock's dialogue... There is the usual shot of what Leslie Fish defines elsewhere as the Hurt/Comfort Syndrome. It is a mostly enjoyable piece if not overly deep piece. A little different is 'Freedom is Standing in the Light.' Ferguson is not a linear writer; her prose is more suggestive than expository, and thus closer to poetry and dreams. This style fits very well the legend-like tone of 'Freedom.' Nowhere is it said that the clanless young man is Kirk's son, and only at the end that the city watch is Spock, but the wealth of symbolic pointers -- the dark and light trees, the abstract solar system design on the knife -- make for that inevitability.... Gayle F's illos are integral to the story, more so that any other illos in this zine are to their stories. 'Breaking Point' is the sort of story that gave Pulsar Press its rep for publishing pain stories. Heavy on the hurt, with several drubbings, fractures, Klingon torture machines, and phaser blast or two, the story doesn't have much of a point, except to possibly demonstrate that Kirk could have the primordial ylem of the Big Bang fall on him, and he'd probably come through okay. 'Who'll Stop the Rain' is similar except it has dumdum arrows. Neither is badly done --the characters are believable (except for their virtual immortality), the writing is clean -- merely not distinguished. 'Point of Know Return' piles hazard on hazard until there's no recourse but The Old Dream Ending... 'Song of My Soul' by April Valentine is more or less Connie Faddis's 'Genius Loci' without the jeopardy -- Spock is lured by the ghost of a musician (he's stopped composing and started decomposing) who wants him to recreate his masterworks. 'The Mourner' is excessively gothic, right down to the 'eyes that were dark pools of sadness.' [In it]], Kirk mourns the loss of his first officer even unto death, sparking a chain reaction in a transplanted peasant girl, not a moment too soon in my opinion. Most of the poetry is unmemorable, although 'Battle's Eve' shows why it's a mistake to write serious poetry in iambic tetrameter... The art, however, is uniformly competent." [5]

Here is a zine which, while dedicated to a seemingly limited theme, hurt/comfort, as especially viewed in the Kirk-Spock relationship), manages, through sensitive handling and consistently varying points of view, to appeal to a much wider audience. Carol Frisbie, whose name has become synonymous with quality and integrity during her years as a zine editor... has offered in SUN & SHADOW a cross-section of stories, poems, and vignettes which adhere to the theme, while presenting nuances in character and sturdy, well-developed plot structure. Much of the work in SUN & SHADOW deserves special mention, but there are several stories which were particularly "gut-wrenching" to these reviewers. Susan K. James' "The Soulless" is a what-if tale of another universe, a different Kirk and Spock, and a turnabout finale guaranteed to stun (we reread several times before its meaning finally dawned on us!). Both of Syn Ferguson's stories, but particularly "Freedom Is Standing In the Light," are unforgettable. The latter is heart-breaking, and is especially enhanced by the author's unique blending of stylistic; and plot. The lyric quality meshes with the legend-like aura of the tale (this is a gift which her editor allows her, without succumbing to the temptation to change phraseology and make it more compatible with the "norm"). "To Enter The Darkness," a short poem by Judy Darnell, provides a chilling, yet satisfying conclusion. Also unique in its own right is Ginna LaCroix's "The Mourner," a short story which presents something of a departure from this author's usual style (which is rendered very well in another selection, "Breaking Point"). "The Mourner" sensitively portrays the tragedy of loss through the innocent eyes of a young girl, a created character well fleshed-out by her author. Also worthy of note are "One Man's Poison," by Diana King, and a humorous departure, "I Have Tried, Captain," by Susie Gordon. Much of the poetry in SUN & SHADOW is also outstanding. Of special note are "Sun & Shadow," a verse song written and set to music by [April Valentine] as a tribute to the zine, and Laurie Huff's "Don't Fear the Dark," again a musical tribute to Carol and Susan's novel NIGHTVISIONS (now out of print) . A personal favorite of ours is Susan K. James' "Eclipse," beautifully worked verses depicting the desolation of a deserted Kirk at the end of the five year mission (the first two stanzas in particular are intensely moving, while the illo by Nan Lewis provides its own accompaniment). Speaking of artwork, the quality throughout is above above average, with special mention going to the cover, rendered by Connie Faddis the above-mentioned Nan Lewis, Merle Decker, and Gayle F. Graphics are clear and fitting to the themes expressed. Altogether, SUN & SHADOW is a beautiful and worthwhile experience for the reader, and is highly recommended. [6]