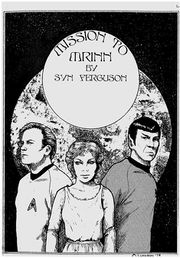 Mission to Mrinn is a Star Trek: TOS 120-page het novel with slash elements by Syn Ferguson. It is illustrated by Signe Landon.

It was also reprinted in the anthology Straight Trek.

The story had won the Ursula LeGuin Award for SF and Fantasy at the Indiana University Writer's Workshop in 1978.

The story features a romance between Kirk and an original female character, Nin, but also draws strongly on the depth of the friendship between Kirk and Spock, and at one point Spock melds with Kirk's unconscious mind and enters a brief dream sequence where they are lovers.

A "Prequel" Of Sorts

Mission to Mrinn is considered to be part of The Price and Courts of Honor series. While not a direct prequel, it is written in the same fictional universe, and some of the original characters created in "Mrinn" return in the later stories. [1]

All Hail the Typist... And Send Us Two Quarters, Please

From the print zine:

... we would like to extend our heartfelt thanks to Ann Shelby. Mary, who usually does our typing, just recently changed jobs and Ann not only stepped in at the last minute, but typed this whole issue in one week. We dedicate this issue to Dr. Who in his sixth reincarnation as Ann-of-the-Sore-Fingers.Because of our last minute change in typists (and typewriters) our page count ran 20 pages over original estimate. If there are any of you out there who can feel it in your heart to help us with our overcost by sending 500 extra, it would be greatly appreciated.

When New Voyages hit the stands, I grabbed it—there was never enough Trek—gobbled it down and was left both aroused and unfulfilled. More! I wanted more even if I had to write it myself. Mission to Mrinn was that effort.... I sat in the kitchen, fireplace at my back, and wrote Mrinn. Longhand. The day I finished typing it (manual typewriter), my horoscope said “Good day for publishing.”... [snipped] ... Now, I can see the strong bias toward K/S in Mrinn, but at the time I only wanted to write Trek the way it “should” be— which obviously had a lot more to do with Kirk and Spock than what’s-her-name. I had never heard or conceived of K/S.[2]

This is a novel that takes Captain Kirk, Commander Spock, and others to the planet Mrinn, and the effects of the Days of Wrath, a ship which accelerated the culture on the planet. Of course, that would be against the Prime directive. [3]

This novel follows Kirk's relationship with a young woman, his friendship with Spock, and the likely violation of the Prime Directive by the crew of a privately owned research ship lost in the sector some 16 years earlier. There is a K/S dream sequence in the novel. [4]

Excellent Signe Landon illos throughout. MTM is a good action/adventure/romantic ST novel as this reviewer has ever read, amateur or pro; with minimal changes it would make an excellent sequel plot to ST-TMP. Kirk is mostly in the center of the action on sort of jamesbondy super-spy/diplomatic mission to undo possible violations of the Prime Directive on the planet Ceros. He also has to remove the perpetrators without violating the Directive himself. Along the way to achieving his goals, Kirk experiences some find sword and sorcery, has time fro romance (when didn't he ever?) and finishes with the most dramatic execution scene (his own) ever conceived by fanfic writer or sfx artist. His rescue involves ship, crew, and great use of technology. In addition to Kirk's incommunicado adventures on the planet, Spock is given a chance to actually command and make and carry out original decisions as the action swings back and forth between planet and ship. I felt the final mind meld scenes to be superfluous and sort of forced, perhaps obligatory. Particularly did I find it totally unbelievable that none of Kirk's mental scenes thus presented included any memory of the big love affair he had just experienced on the planet. Also the Alexander/Egyptian slave parallel was uncalled for (though delightful) in the context of this genzine. Overall, well written, highly entertaining, and most enjoyable. [5]

Enterprise is sent to the interdicted planet Ceros to see if recent changes in that society might have something to do with a shipwreck in the area. Sure enough, they find a psychotic survivor wreaking havoc and have to find a way to eliminate him without contaminating the planet themselves. They also discover that the Maidens of the Lady of Mrinn, who become irresistably fertile only one night of their lives at their Ceremony of Choosing, are failing to bear viable daughters, and therefore dying out. They are pacifist, somewhat telepathic, and have kept their culture stable. Kirk & Co. to the rescue through a series of perils (guess who the Maiden Nin chooses!). Plenty of hurt-comfort here, as Kirk is called on to sacrifice himself for the Prime Directive.

Overall, a fun read; my favorite bits were in the interesting visions of the Kirk/Spock mind-meld at the end. This is sometimes designated "slash" - doesn't seem so to me; there is just one suggestive but non-explicit mind-meld vision that leans that way. Characterization is generally good and there are lots of nice little interactions. I particularly liked a brief scene in which Chapel tries to explain Spock to McCoy after a bitter row between those two - that Spock cannot help seeing the whole picture, it's like seeing in color to him.

Rather choppy execution - this tale could have used some chapters to mark transitions and more editing. There were some plot points/devices I didn't care for. 1. Kill all the bats? Our guys can't leave any trace of themselves but can commit ecocide with impunity? Well, minor point in the story, just a hot button for me... 2. Why does this pacifist culture treat grisly execution as a public amusement? [6]