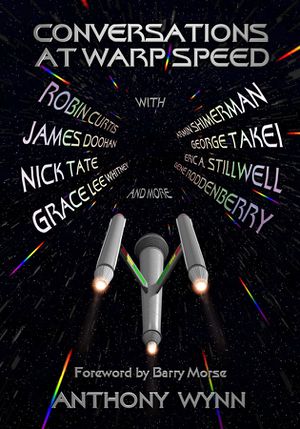 Conversations at Warp Speed is a non-fiction Star Trek book of interviews by Anthony Wynn.

The Foreword was written by actor Barry Morse.

From the back cover:

"Conversations at Warp Speed features insightful interviews with actors who were there at the inception of the original Star Trek television series (Grace Lee Whitney, George Takei, and James Doohan). They share their memories of the science fiction phenomenon and are joined by additional performers who appeared in later series and film incarnations (Robin Curtis, Nick Tate, Bibi Besch, Armin Shimmerman, and Kitty Swink).

Other interviewees include producer and writer Eric A. Stillwell ("Yesterday's Enterprise"), as well as the creator of Star Trek himself, Gene Roddenberry.

Not only limited to their various involvements with the classic show, a number of the interviews in this book more deeply examine the career, activities, and other notable work of the performs and professionals - both prior to, and following their work on the iconic series and films.

The book contains a joint interview with two longtime Portland, Oregon Star Trek fans and collectors, Carol Jennings and Marlene Daab. The two women talk about what attracted them to the show and to fandom, as well as their volunteer work at conventions. The interview with Eric A. Stillwell contains remembrances of his participation in fan groups and what led to his work on the Star Trek franchise.

Excerpts from the Preface:

As a child, one of my first memories in the early 1970s was of watching reruns of the original Star Trek series on Sunday afternoons. Over the years, the characters seemed like old friends and my enjoyment of that show led me as a young teenager to other programs, such as Space: 1999. In succeeding years, I had the pleasure of attending, working on, and ultimately organizing a number of varied events, conventions, and personal appearances featuring many of the "Star Trek" and "Space: 1999" actors and actresses. Hearing these men and women speak about their lives, experiences, and their craft has always been fascinating to me. It led eventually, in fact, to my work with Barry Morse, co-star of "Space: 1999" and "The Fugitive", on the actor's theatrical memoir "Remember with Advantages" and this book...

Even though the interviews in "Conversations at Warp Speed" span some twenty-five years, the information they convey is timeless. It's my hope that you will laugh and learn - perhaps even shed a tear or two - as you take the journey with these widely varied men and women, leading us through the course of events that shaped and formed their careers.