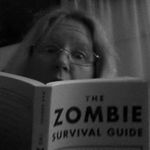 Rebecca Eisenhuth is a prolific fan author and artist.

Her works have appeared in hundreds of zines and publications from the 1980s to present.

The majority of her fan fiction and art is centered on Barbara Bain and Martin Landau, whether it is in Space: 1999, Mission: Impossible.

She has also written for Savage and the Harlem Globetrotters on Gilligan's Island, commonly referred to as "J.J. and Olga" stories.

Eisenhuth has also written for other fandoms as well, including The Wild, Wild West.