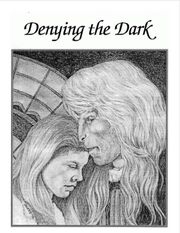 Denying the Dark is a het 135-page Classic anthology. It contains seven stories by Debbie Ristick, one by Lynne Wexler, and one by Ann Cognito. Art by Rosemarie Hauer, Sandy C. Shelton, Anna Deavers-Kelley, Pam Tuck, and James Wappel. 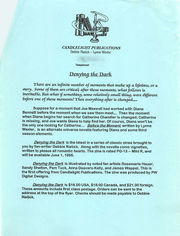 From the online flyer posted to volume Of Love and Hope:

"There are an infinite number of moments that make up a lifetime, or a story. Some of them are critical; after those moments, what follows is inevitable. But what if something, some relatively small thing, were different before one of those moments? Then everything after is changed..... Suppose for a moment that Joe Maxwell had worked with Diana Bennett before the moment when we saw them meet... Then the moment when Diana begins her search for Catherine Chandler is changed; Catherine is missing, and Joe wants Diana to help find her. Of course, Diana won't be the only one looking for Catherine... Before the Moment, written by Lynne Wexler, is an alternate universe novella featuring Diana and some third season elements. Denying the Dark is the latest in a series of classic zines brought to you by fan-writer Debbie Ristick. Along with the novella come vignettes, written to please all romantic hearts and illustrations by several noted fan artists. Rated PG-13."

Some summaries below from the Helpers' Network Quality Fanzine Review Online:

This Classic anthology zine, mostly by Ristick, has one really first-rate, crackerjack story in it: novelette "Before the Moment" by Lynne Wexler, the best SND alternative "Though Lovers Be Lost...." scenario this reviewer has ever seen. It jumps off from the idea that Diana was brought in on the case sooner, right after Catherine's abduction, and that she and Vincent, with their shared paranormal sensitivities, combine as a team to locate Catherine. Wexler's Diana is crackling with energy, dead-on characterization, and a wicked sense of humor. And although she's not romantically attached to Vincent at all, they make a perfectly wonderful team: best friends, in the best sense of the word. Or, to put it another way, Vincent's as close to her as to Father, or Mouse, or anyone else Below he loves in a non-romantic context. This piece of intelligent, masterly storytelling credibly picks up loose threads from "Though Lovers" to weave a different storyline that's as compelling, in its own right, as anything in the series itself. This tale is worth the price of the zine, all by itself, and a must-have for Diana fans as well as devotees of well-written SND's.

Though Ristick's stories, of which there are seven, are not so dramatically ambitious as Wexler's piece, they're nevertheless well told and true to the series' premises. In the Prelude to part one of the zine, Ristick sets the scene for Vincent's first discovery of Catherine in the park. In "The Power of Love," Vincent comes to a decision about taking the next step in his relationship with Catherine, triggered by Elliot's kiss in "A Kingdom by the Sea." "Trust in Dreams" is a brief anecdote of a reality that turns out to be better than a dream for Catherine. The Prelude of part two has Catherine musing about the prospect of telling Vincent about her pregnancy, while on her balcony he waits for her arrival. In the "Aftermath" of Catherine's being recovered, Father looks in on the loving pair and is relieved that they love one another. And in "For Always," love-hungry Vincent guides Catherine to a special, private place he's created for them behind the waterfall. And in "A Little Surprise," Catherine reveals to Vincent that she's pregnant again. In Ann Cognito's "Under the Rainbow," Vincent and Catherine attend a Halloween party, then ramble the streets, and Vincent gets warily acquainted with a carriage horse.