Threshold to Dreams is a het Beauty and the Beast anthology. 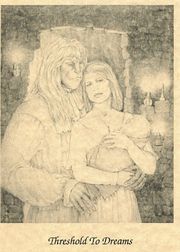 Although Diana appears in two stories, these are SND stories. In the first story, 'Whenever You Doubt' by MariLynn, Vincent strikes a bargain with Death to regain Catherine. In 'Treasure' by MariLynn and Roxanne Shearer Koogler, Joe and Diana find romance. There is also poetry. [1]

This zine contains a variety of story lines which return Catherine to Vincent. Some stories deal with Catherine surviving the morphine injection while in 'Whenever You Doubt,' Vincent battles Death, itself, for Catherine. Diana appears as a friend and Joe's significant other in some stories. Nice art. [2] 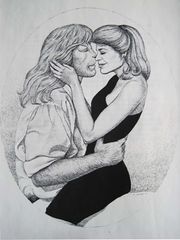 This second in this SND series extends and interlinks many of the storylines and events of the first volume into an ongoing narrative. The series as a whole shows Catherine and Vincent, now married, overcoming lingering doubts and memories and facing the ordinary events of everyday life Below. In the stories, Diana is a close friend but in love with Joe; in Roxanne Shearer Koogler's 'Theory,' they fight over the danger of her work, and in MariLynne's 'Never a Bride,' they marry. The central event of this zine is Father's suffering near cardiac arrest (Debbie Ristick's 'In the Span of a Heartbeat') and his being subsequently hospitalized ('In Spite of It All' by Margaret Davis). Anita Hooson's 'In Sunshine or in Shadow' recounts the birth of V/C's second child. Other fiction by Amy Bechtel, Linda Mooney, Sharon Wells; poetry by Margot Ann Quigley, Kay Simon, Linda Jordan, Winifred McBeth, Bruce Holroyd, MariLynne and Sue K. [3]