The Manifest is a gen multimedia anthology of fiction centering around the paranormal.

Several people have asked where did that name [title] come from? Very simply, when I first started planning this zine, I was planning to do a Friday the 13th, The Series fanzine (the Manifest of F13 is the book of cursed objects). As I started putting ideas together, I realized that most of the fandoms that interested me all had a paranormal slant … and doing a multi-media zine would probably be more fun than doing a zine dedicated to only one show. And Susan Garrett has already done a beautiful F13 zine (Curses Foiled Again), so it made sense to broaden the scope of the zine to include a greater variety of paranormal media. So the title stayed the same , I liked it , but the focus of the zine widened to include Beyond Reality, She-Wolf of London, Shades of LA, Forever Knight, etc., and original work in the paranormal fiction field.[1]

Back in the early ’90s, I took some time off from fandom. But by the spring of 1992, MaryB had convinced me I really needed to have a computer and get online. “Online” at that point meant using a service – the internet was barely a thought at that point, and it was almost impossible to communicate with someone electronically if they weren’t on the same service as you. Online was really expensive, too, with dial up services and charges by the minute. But connecting with the folks on GEnie helped me get excited about fandom again, and my next round of zines – and a new press name – were born. The 1990s saw the retirement of Pursuit Press, and the birth of Vendredi Press. The first zine for Vendredi Press was The Manifest. The zine ran four issues, and was one of the most fun zines I’ve ever done. I love multi-media zines, and it was so much fun to do one focusing on a subject matter I and my friends kept coming back to – spooky but not gory TV. The X Files was still a few months away on Fox, the SciFi Channel was just premiering, and the world as we knew it – mundane and fannish – was about to change forever.[2]

When I was lured back into zine publishing in the early ’90s, most of the shows I was interested in had a paranormal flavor. I’m not a gory horror fan, but I do like suspense and the odd ghostie and ghoulie. It turned out, so did a lot of my friends, and it wasn’t long before I had a since on my hands. It’s the first zine I did using “modern technology” – in other words, not on a typewriter or standalone word processor. My first zine using the Internet, too. It was the start of something new … part of the early days of a wave of change that completely remade the face of fandom.[4] 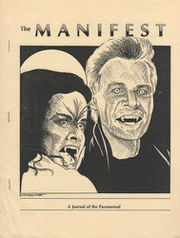 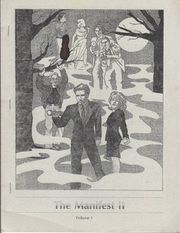 The Manifest #2 was a fun zine to do, connecting with old friends and new fandoms. Not only that, but I had so many submissions, the zine spilled into two volumes. ...I’m especially fond of the art I did for MaryB’s Shadow Chasers/Sapphire and Steel crossovers. That was a special treat working on this zine – getting to work so closely again with Mary. She’s present in every zine I’ve ever done, but it was nice to be able to work with her so much on this one.[6] 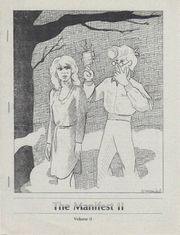 [Helt]: In"Helt" by L.C. Wells, survivors of a World War II Norwegian Commando team are dying suddenly and violently. Mulder and Scully are assigned to the case and discover that the men are being killed by something old and decidedly not human. A good, solid story, although the main plot device is a little outside the X-Files usual purview. That said the characters are well handled and the plotline is interesting and complex enough to easily hold my interest. Recommended. The story is twenty pages of small but open text and has a nice black-and-white illo for the title page. Deb has taken the white space at the end of the story and filled it with "X-facts", little bits of info gleaned from the episodes. I like this.[7]

[Haunting Melody]: The second story in this zine is "Haunting Melody" by the editor. Deb Walsh. In this story Mulder is called back to his hometown when his sister is discovered wandering around in the old family home, not a day older than when she was taken. Mulder heads back home with Scully in tow to try and figure out if this is indeed Samantha. Clues point both ways, and the rather shell-shocked Mulder struggles with his feelings and suspicions. Meanwhile, we meet all kinds of folks from Mulder's past. A good, interesting story, my favorite of the ones I've read so far. The characters are very well handled in terms of the series and interact naturally. The plotline advances well and has some genuine surprises. I loved all the eccentric characters we meet from Mulder's hometown. I was truly surprised by the way the plotline with Samantha turned out and really liked it. This is a good story.[8]

Notable for the first appearance of Eddie Plummer, Sheila Paulson's original character in Leftover Souls; he later appears in four of her novels. Also, a cute birthday story from Mary Robinson, Don't Forget to Write.

Verdict: A multimedia zine with a good mix of 'spooky' genres. I enjoyed almost everything in it, including the Indiana Jones/Forever Knight story.[9]

Manifest 3 was published in 1995 and contained two volumes. See the publisher's note below for the explanation. Portions of the zine can be found online here.[10] 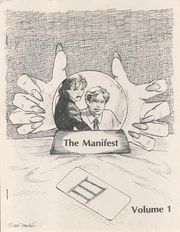 This was another fun zine to do, especially because I got to do it with so many good friends. I was also in the throes of a new fannish passion – Kung Fu: The Legend Continues – and writing insanely at the time. It was a good time, full of promise and excitement. And this was a good zine, too. The funny thing about discovering a new fandom is that you want to share it with everyone. Now. I couldn’t wait to do a KF:TLC zine to share my new addiction, and there was enough paranormal stuff going on in the show, I just had to include stories in this zine. I still like these pieces, and I still like this zine. And like issue #2, this zine was published in two volumes...[11] 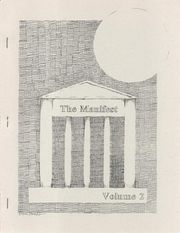 Another excellent two-volume zine from Deb Walsh, focusing on shows with a paranormal bent. I haven't had time to read the whole zine yet, but the three X-Files stories make it an excellent buy even if that's the only show you like. "The Delphino Dilemma" by Aaron Thode is presented in script format, and is thirty-nine pages of medium-sized double-column text with some nice black and white art spaced throughout. Usually I'm not too fond of stories done in a script form, because 1 find them hard to really get into and rather dry to read but this one does a good job of catching the feel of the series and presenting a good, interesting plotline. The story takes place soon after the final episode of first season and deals with the break up of tin; X-files and the splitting up of our heroes. The main plotline has to do with a mysterious rash of dolphin deaths and beachings along the Texas coastline. It soon becomes linked to the death of research scientists from a military research facility. The first dead dolphin appears to have come from this facility, released by a radical dolphin rights group. This is a good solid story. The plotline moves along at a good pace and isn't too rushed. The climax is especially exciting. Mulder and Scully are both very well handled and the dialogue comes across very well. This probably would make a good episode, but then I'm a dolphin lover myself so I'm a tad biased. One of the better stories I've read so far and well worth the price of the zine alone. In "Zeitgeist" by Adam Webb, a reporter disappears after making some allegations about UFO activity in Dayton, Ohio. Mulder and Scully set out to investigate and Mulder gets a talking to from some enigmatic and powerful men who claim to be from the United States Air Force. They warn him to back off before he gets noticed by a mysterious group called "the Alphans". Mulder soon realizes there is more to this than another military UFO, and is soon caught up in a conspiracy that threatens all of humanity. The premise of this story seems too far out in left field for the series as it now stands, but if you consider this to be an alternate universe, it makes a readable tale. It does suffer from talking heads, i.e., not too much going on other than a lot of talking, but it's an interesting concept that the writer plays with. The story is twelve pages long with one full page black and white illo. Type font is that same as above. The third story in this issue is also by Adam Webb and is called "Conspiracies". It is eight pages long, with one full-page illo and again it is in the same font as the two above. This is a sequel to "Zeitgeist" and deals with the same premise. This time Mulder is framed for the death of one of his informants. Adam Webb is obviously working on a series of stories, as this little tale really leaves things hanging for our heroes. This story does not stand well on its own, but combined with "Zeitgeist" you'll have no problem following it. A little short and boy does it leave the readers hanging. I'm certainly hoping that the next story in the chronology will be in The Manifest #4! [12]

Manifest 4 was published in 1996 and contains 294 pages. Art is by Barbara Caldwell, Laura Miles, Sharon Palmer, and Deb Walsh. Cover collage is designed by Deb Walsh. 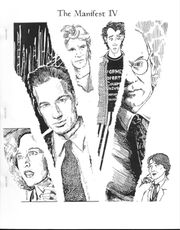 front cover of issue #4, a collage of the inside art, Deb Walsh

Hummer by RC (novella) A strange humming noise leads three students to their deaths, and Mulder and Scully on the trail of a deadly phenomenon.

Episode guide to the stories in this issue, plus episode listings for Adventures of Brisco County, Jr., Earth 2, MacGyver, Quantum Leap, Robin of Sherwood, seaQuest DSV and Vanishing Son.