It ran from 1979 to 1982, and is often seen as ITV's answer to Doctor Who[1]. The series was created by Peter J. Hammond, who also wrote all the stories except for the fifth. In 2004, Sapphire and Steel returned in a series of Big Finish audio dramas starring David Warner (Steel) and Susannah Harker (Sapphire). David Collings returned as Silver.

Although TV Tropes rightly points out that "[along] with Blake's 7 and Doctor Who, Sapphire and Steel forms the Holy Trinity of British Science Fiction television"[2] the television show has never had the megafandom-level following that the other two shows have (at times, in Blake's case) enjoyed. During the 1990s, there were a small number of S&S-only anthology zines, and S&S fics were also published in multimedia zines.

In 2014 Lost_Spook (one of the most active writers on Livejournal and Archive of Our Own described the fandom thus:

The main active writer is spikesgirl58. SeriesFive and I were active simultaneously with a very simular take, but completely coincidentally, John_Amend_All, lsellersfic/annariel is quietly active, kittenmommy, and Mab Browne, amaresu & glennagirl occasionally & KerrAvonsen. Past ficcers/vidders have been hearts_blood, fog_shadow, and various other for Yuletide and things. The comm sapphirensteel was founded by Sheila Adamson [in 2007], and element_flash [2008] by amaresu & now modded by kittenmommy (and Mab Browne). The main body of LJ fandom is David McCallum-centric & include a bunch of Man From UNCLE fans. You get far more Joanna Lumley and David Collings fans around the fringes and Yuletide. (Lost Spook)[3] 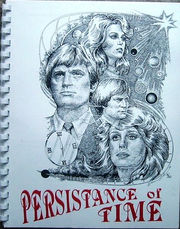 cover of Persistance of Time #2
Gen:

Multifandom: Sapphire & Steel fic also features in the following zines, although there are generally only one or two S&S fics per zine or even zine series. Fandoms that are usually combined with S&S in these multimedia zines include Doctor Who, The Man From UNCLE and Blake's 7. 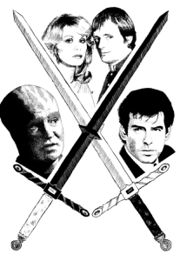