Xenozine is a gen and implied slash multimedia anthology.

An ad in Datazine #34 asks: "Are you tired of reading mundane media zines? If you hunger for the weird, forbidden, and different then Xenozine is for you!"

An ad in Pop Stand Express #5, "If you're tired of reading mundane media zines... If you hunger for the weird and forbidden... if you're bored with ponderous, self-righteous B.S... THEN... DON'T DELAY! Obtain your copy now!"

The art is by Kirby, Kowalski, Lloyd and others. This zine is subtitled: "Episode One: A New Grope." 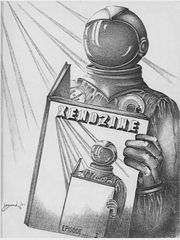 XENOZINE is one of the latest enties into the world of zinedom and D.J. Driscoll's first attempt at publishing a zine. XENOZINE is not one of your more serious minded zines. It is a generally unpretentious, overall clean cut zine, whose stories range from the insane (Mary Sue and the Bandit by Robin White) to the inane (The Sad Lib Affair or How to Create an UNCLE Affair by Filling in the Appropriate Blanks). There is a good feeling to this zine, it doesn't take itself seriously, nor does it wish to be by the readers. It wants you to have fun and it largely succeeds. There is something for everyone in its pages. The stories hit about every facet of fannish writing (hurt/comfort, Mary Sue, slash). Most of the stories carry a light hearted feeling about them, a feeling that urges one to have fun, not to dissect i's paragraphs for hidden meanings and purposes. D.J. has succeeded in gathering many of UNCLE's publishing writers, something that had not been previously done. Of course, this is not-to say the zine is without fault. Except for one nice line drawing of Captain Harlock, most of the art is better off ignored, what little of it there is. Also, it is most difficult to find your way around the zine, as not only does it not have a table of contents, it doesn't have any pages numbered. The editor insists it's because the zine was set up like a movie and movies don't have page numbers. It will be inbresting to see if the-format is changed for the next issue. Still, these are factors easily overlooked. After all, it's not every zine that's interrupted for the Emergency Broadcast Signal. If you're looking for a generally, overall pleasing zine, Xenozine would be a good choice. In this author's jaded opinion, it is not a zine that should be lightly glossed over and ignored simply because it's a first attempt. Do yourself a favor, get yourself a copy of XENOZENE and read yourself into a nice padded cell. [1] 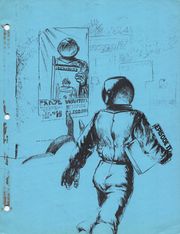 Xenozine 2 was published in 1985. It is subtitled: "Episode Two: The Wrath of Cannes."

Act III – The Search for LOCs

Well, D.J. still doesn't have the pages numbered, but she assures me it's on purpose. However XENOZINE 2 has evolved considerably more since the first issue. It has maintained its part Star Wars, part Man from UNCLE format, but the former is pretty standard, partially due to the limit of its 'mother' media. XENOZINE 2 offers a teary ; "No Blaze of Glory." We are introduced to Master Obi, a struggling Jedi-in-training and Leia and Han's son, in "Trouble Season" by Debra Doyle. I have to admit to having trouble with this story until I realized that Obi was NOT Obi-Wan. It flowed more smoothly after that. "Dagobah Diary" (not too much mystery concerning what that's about), by Robin White, a letter from Lando, as seen through the pen of Shadowhawk, and two filks by Maggie Nowakowska. This is in addition to the "finish-the-story" contest, and "A long time ago in a galaxy far, far anay .. . Soda Wars". Yes, not even zines are sacred anymore. Next, we come to the hefty ACT II - the Man from UNCLE section. Barbara T offers two short shorts — both cross-universe and both tongue-in-cheek. Laurie Keeper offers one of her hurt/comforts as "The Good Friday Affair" — a little too h/c for my tastes. Joy Ashenfelder does what she does best in The Letter," and tugs at our heartstrings. Gina Martin does a pretty amusing Disneyland tale with "The Magic Kingdom Affair," although some of the scenes are a bit laborious and could have been whittled down without hurting the story at all. There is "The Bump and Grind Affair," by C. Kirby, and, yes, there is a relationship. D.J. Driscoll gives Illya bubblegum lessons in 'Tm Forever Blowing Bubbles"; Denetia Arellanes explains why "It's Tough To Be an Uncle Agent"; and the "What the Hell? Affair," by Issac Person, is interrupted by a special bulletin by Susan Matthews. And there is a definite "slash" bent in C.C. Smith's "The Interlude Affair." However, the highpoint of the entire UNCLE section is "The TCL Affair," by Pam Williams, a woman who has, unfortunately, left UNCLE for other fandoms unknown. Napoleon gets to mother Illya, literally, and it offers both insight and affection into their relationship. Act III was reserved for LoCs, and Act IV handled everything else, including a BG story by D.J. Driscoll; a Sapphire & Steel piece by C. Kirby; "Stay Steele" (RS), by Bev Clark; and a hodge-podge of other material (DW, ST, Hitchhiker's Guide, Captain Harlock), also worthy of attention, but space limits discussing them all. The art in XENOZINE 2 is also a far cry from the offerings of the first issue. There is more of it, and it's better rendered, with some superior pieces from Sue Landon and Denetia Arellanes. Plus there's all the usual insanity, offered as only D.J. Driscoll can do. XENOZINE 2 may not be the best SW or UNCLE zine ever assembled, but it's definitely the best SW/UNCLE zine I've come across. And it's absolutely worth your attention. [2]