Remington Steele is an American television series of the mid-1980s starring Stephanie Zimbalist and Pierce Brosnan. 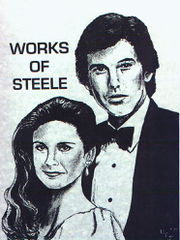 Cover of the zine Works of Steele (1997). Art by Peggy Spalding.

A female private detective, Laura Holt, has trouble getting people to take her seriously as a private investigator because of her gender, so she invents a boss, Remington Steele, and renames her agency to Remington Steele Investigations. Through a case, she meets a male thief who is trying to steal the very items she's supposed to protect; he decides not to steal said items and assumes the identity of Remington Steele. This makes Laura happy, as this means clients can now meet Remington. The relationship turns personal, but is fraught with tension since Remington won't tell her his real name or anything about himself. 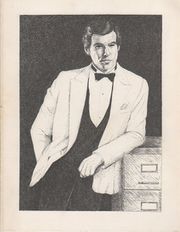 The fandom is originally zine-based and predominantly het, although there is a small subset of Steele/Murphy Michaels slash about. A Yahoo!Groups list, RSFic, is still active and promoting fanfic, as is a LiveJournal community, steelewriting. A few stories have been written for the Yuletide exchange.

Some fan fiction is also archived at the websites below. Note: not all websites are active, use the WayBack Machine to look for offline sites.

The majority of Remington Steele fanvids were done in the VCR era closer to the time of the show's height of popularity. Some of the more notable vids were done by the California Crew and include:

Let me say here that I adore Pierce Brosnan. His was the first honest-to-goodness fan club I ever joined and I am still a member. I stayed with that show to the bitter end, and by the end I was pretty bitter. The problem was not that the producers ruined the romance by introducing physical love. The problem was that they dragged the tease out to the point of insanity, insulting in the process all the people who enjoyed the show. For those of you who did not watch each episode, the romance was consummated-off camera-at the very end of the very last show, but by then, I doubt if many people cared. What drove me nuts was not that I wanted to see raw sex or even Pierce with his shirt off. What drove me nuts was the sheer illogic of a plot that said this woman, who supposedly was crazy in love with this man, who in practically every episode declared his love for her and his desire to make love to her-this woman, moreover, who was not a blushing virgin but had lived for a time in a sexual relationship with another man—this madly-in-love woman was so insecure or simply so bull-headed that she kept saying no because-get this-she did not know all about his past and/or she was afraid if she gave in and he "had her" she would wake up and find out he had moved on. The guy hung around for four years! How much proof of fidelity did she need? And this was before AIDS was an issue.