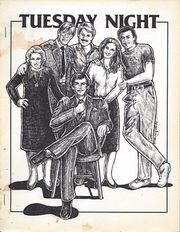 front cover by Liz Hollahan, back cover is blank

The text is printed on only one side of very thick paper.

"Tuesday Night" refers to the night these two shows originally aired on television, making their viewing a community event. If fans missed the initial viewing, they had to wait until the summer reruns to see the show. This is a concept that fans who are now used to watching shows when they like, and where they like, would find alien.

The editor's note at the end of the zine says that just before it was published, NBC made a scheduling change, and at least one of the shows was no longer a Tuesday night event. She decided to stick with the original title, both because it was too late to change it, and because she had become fond of it.

Discrepancies, and Time Before the Commonality of the VCR

Access to canon and a VCR made the Riptide story a challenge. From the author:

There may be some discrepancies in my Riptide story but I hope none of them are major ones. I have none of the first season episodes on tape and I'm missing two or three of the second season stories. Whenever I had a question on background I had to get with a friend (who doesn't have a VCR) and pick her brain for what she remembered. We'd talk it over, trying to recall scenes and dialog. (I'm not sure that having all the tapes would have helped that much anyway; sometimes the show's writers can't keep it straight.)

I also got some help from a very good Riptide letter-zine. Where I couldn't track down the background, I tried to write something that was consistent with what I remembered. Unfortunately, a lot of the information I got came after the story was ready for the printer and with an excellent-but-not-super-powerful word processing program and an almost-but-not-quite-compatible printer it takes six hours to print it out in double column format. Since I felt the few things I would still like to change were relatively minor, I decided to leave it as it is.

This may not be the first story of this type you have read, but it's not this late 'cause we were hanging onto it for good luck!

["Steele My Heart"] was started in February, 1984 as a result of a discussion on how the plots and characters were being developed (or not being developed, as the case may be). It was originally intended as a fanzine piece, but as it progressed, we decided to submit it to the show, hoping to let them know how we wanted to see the relationship between Laura and Remington develop. In May, 1984, we got information from MTM Productions, Inc., and on August 1, 1984, MTM received the finished story. We waited, and waited, and waited patiently (and at times not patiently at all), wrote asking for a status in February of 1985, and still waited with no word.

Finally, after a few phone calls to Los Angeles,, we found out that the Remington Steele production office had rejected the story. We eventually got a nice letter from them (or at least as nice a letter as any rejection can be) saying that the story was good but lacked a necessary ingredient --. We won't tell what it is; we don't want to give anything away. [1]

Please remember when you are reading this that it was written from a second/early/third season perspective. We hope you enjoy it!

Some other examples of fans submitting scripts to TPTB, and after rejection or other brush-offs, turning them into zines.