Blood and Fire was a script written by David Gerrold for Star Trek: The Next Generation in May 1987. The story included a mention of homosexuality and tapped into people's fear of AIDS. The script was never filmed and Gerrold left his job shortly afterwards.

Gerrold later offered the script for sale in 1989 to raise money for AIDS charities. He reworked the script into a 2003 original science fiction novel (in his "Star Wolf" series). In 2008, the script was adapted for a fanfilm episode of Star Trek: Phase II. 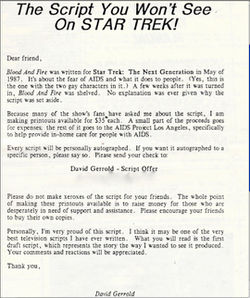 ad from David Gerrold, in which he sells a unused script for Star Trek: TNG and donates the money to the "AIDS Project Los Angeles."
From the ad: "'Blood and Fire' was written for Star Trek: The Next Generation in May of 1987. It's about the fear of AIDS and what it does to people. (Yes, this is the one with the two gay characters in it.) A few weeks after it was turned in, 'Blood and Fire' was shelved. No explanation was ever given why the script was set aside." According to a Trexperts published around 2008, this script was to have been filmed by a fan-run group for a fan film series called "New Voyages"/"Phase II".

The Casual Nod to Sexual Preference

The script contains the following lines, which represent all we are given to identify the relationship between Freeman and Eakins.

HODEL: ... So how long have you and Freeman been together?
EAKINS: Is it that obvious?
HODEL: Yeah, it's obvious.
EAKINS: Since the Academy. Two years.

Following a speech to a large crowd of Trekkers, Gene Roddenberry, the creator of “Star Trek,” took a question about “The Next Generation” from a fan named Franklin Hummel, a Boston Public Library employee and director of a gay science fiction group called the Gaylaxians. Gerrold was in the crowd, taking notes.

“Franklin asked whether there would be a gay character on the new show. He made the point that [the original] ‘Star Trek’ had been a leader in bringing black and Asian characters to television, that this was the next step,” Gerrold told me in May. “Gene agreed. He said, ‘Sooner or later, we’ll have to address the issue. We should probably have a gay character.’”

Back in Los Angeles, Gerrold says, Roddenberry mentioned “the gay issue” in a meeting about the direction of the new series. Apparently some members of the staff were surprised. “Next Generation” producer “Robert Justman made a remark about ‘ensign tutti-frutti,’” says Gerrold. “But Gene very calmly explained that it was time.”

A few months later, in late 1986, Gerrold began work on “Blood and Fire,” his first — and, as things turned out, only — “Next Generation” script. In the story, Captain Jean-Luc Picard and his Enterprise D answer a call from a distressed medical research vessel. When the mission team beams over, it finds that the ship’s crew is infected with “Regulan blood worms,” an apparently incurable pathogen so deadly that Starfleet Command has ordered its officers to destroy any ship they contaminate.

Aside from its obvious reference to AIDS, the script also contained a casual nod to homosexuality. “How long have you been together?” Commander Will Riker asks a pair of male officers who accompany him to the blood-worm-stricken ship.

“Since the academy,” one replies.

“This was during one of the worst parts of the AIDS crisis,” Gerrold says. “Before protease inhibitors, before AZT. AIDS was not a treatable condition; it was a fatal disease. And the fear of it was widespread, so much so that blood donorship had reached critically low levels...

In Gerrold’s script, curing the disease required a complete blood transfusion. To treat the infected, the worried Enterprise D crew was asked to donate blood. “I felt this plot point would raise the consciousness of 20 million ‘Star Trek’ fans overnight,” says Gerrold. “In fact, I was hoping that we could put a card at the end of the episode encouraging people to donate blood.”

Gerrold never got a chance to lobby for that card. After a series of arguments with Roddenberry’s underlings, Gerrold quit the show, and the episode was permanently shelved. Gerrold says, half-joking, that the script got caught up in “orifice politics.” [1]

Many “Star Trek” insiders say Gerrold’s “Blood and Fire” was simply a bad script. “David has made a career out of this sort of claim,” says Ernie Over, a Wyoming journalist who worked as Roddenberry’s personal assistant. “He had an agenda, which was to get gay people onto ‘Star Trek.’” “I knew Gerrold from 1972, and I’d read all his books up to that point. ‘Blood and Fire’ was not his best work,” says Richard Arnold, Roddenberry’s research consultant on “The Next Generation” and a columnist for the official “Star Trek” newsletter. “I was almost offended by the stereotypes. The scene I remember particularly was when the gay couple was having a sort of lover’s dispute. The one we could call the wife was expressing concern to the other about getting into dangerous situations. He was saying stuff like ‘You know how much I worry about you when you’re away.’ I mean, come on. This was absolutely ridiculous — for Starfleet officers or for gay men.”[2]

Gerrold Talks About this Script: 2011

The long story with “Blood and Fire” is that a month after Next Gen was announced Gene and I were at a convention in Boston. We’d both been invited before anyone knew there was going to be a new Trek series, so there was a lot of excitement at the convention because this would be the first time Gene would speak in public about the new series. There were 3,000 people in the room waiting to hear the news. They had a lot of questions. But there wasn't really anything to say yet. We were still getting moved into offices and had not really made any serious decisions about what the new show would be. So it was mostly just promises that we were going to do our best to catch lightning in a bottle again.

One fan asked, “Well, are you going to have gay crewmembers, because in the 60’s you had Black and Asian and Latino, etc.?” Gene said, “You know, you’re right. It’s time. We should.” I was sitting on the side, taking notes, of course. So there it was: Gene had said it in front of an audience of 3,000 people in November of 1986. I was a little bit surprised and delighted that Gene was willing to go there. We got back to L.A. and Gene said it again in a meeting, and somebody in that meeting – I won’t say who – said, “What, we’re going to have Lt. Tutti-Frutti?” Gene balled [sic] him out and said, “No, it’s time. And I promised the fans we’re going to have gay characters.”

Then, Rick Berman, who was not yet aboard the show but was still a studio exec, passed us a memo saying, “Here are some of the stories I think you can do.” It was a three-page memo listing, I guess, about 50 ideas, and the third one was an AIDS story. And I thought, “Well, I’ve got this from Gene and Rick, so the studio has no problem.” Now, my cause at the time was blood donorship, and I knew that people were so terrified of AIDS they had even stopped donating blood. So I wanted “Blood and Fire” to be about the fear of AIDS -- not the disease but the fear -- and one of the plot points involved having the crew donate blood to save the lives of the away team. I thought, “If we do this episode right, where blood donorship is part of solving the problem, we can put a card at the end telling viewers that they could donate blood to save lives, too.” I thought it was something Trek should be doing, raising social awareness on an issue, and if we did it right, we could probably generate a million new blood donors at a time when there was a critical shortage... There were two characters who were not very important to the story, but they were the kind of background characters you need. At one point Riker says to one of them, “How long have you two been together?” That was it. The guy replies, “Since the Academy.” That’s it. That’s all you need to know about their relationship. If you were a kid, you'd think they were just good buddies. If you were an adult, you'd get it. But I turned in the script and that's when the excrement hit the rotating blades of the electric air circulation device. There was a flurry of memos, pro and con. One memo said, “We’re going to be on at four in the afternoon in some places and we’re going to get angry letters from mommies.” My response was, “If we get people writing letters, it shows they’re involved in the show, and that’s exactly what we want. We want them engaged, and a little controversy will be great for us.” And I said, “Gene made a promise to the fans. If not here, where? If not now, when?” But the episode got shelved anyway and that’s when I knew I wasn't going to be allowed to write the very best stories we should be writing. The original show was about taking chances. If we weren't going to take chances, we weren't doing Star Trek. So I let my contract expire and I went off to do those other things I told you about. (Editor’s note: “Blood and Fire” later became the basis of Gerrold’s "Star Wolf" book series. Also, eventually, he revised the “Blood and Fire” teleplay and directed it as a New Voyages fan film.)

Some other examples of fans submitting scripts to TPTB, and after rejection or other brush-offs, turning them into zines.