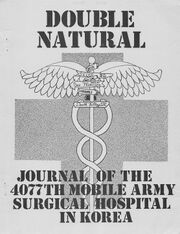 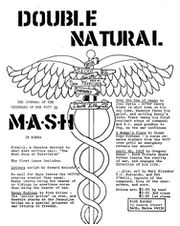 Double Natural is a gen 100-page anthology. It has the subtitle, "Journal of the 4077 Mobile Army of the Surgical Hospital in Korea."

The art is by Pat O'Neill, Mary Bloemker, T.J. Burnside, and Nancy Gervais.

From a flyer: "Finally, a fanzine devoted to what most critics call, "The Best Show on Television."

Like most of Rich Kolker's productions, DOUBLE NATURAL is a quality zine, and it's about time someone put out a M*A*S*H zine! The best stories are by Rich himself, the one by Greg Baker, and a rejected script by Howie Weinstein. Baker's "April 20, 1918" is a tight, lucid account of Private Sherman Potter's first day in the trenches during the Great War. "Absence Makes the Heart Grow Fonder," by Gail Pittaway, is a fun story about what happens to the 4077th when Hawkeye goes on a two-week leave. "Over the Sea of Japan," by Joel Davis, tells of the events immediately following Radar's announcement in the OR about Colonel Henry Blake's death. Overall, it misses the poignancy it tries to reach by too much commiseration and sentimentality. "Prologue," by Rich Kolker, is a "M*A*S*H meets Questor" story when BJ's 17-year old cousin, Jerome Robinson, is brought to the 4077th as a patient, while another visitor is a mysterious Dr. Vaslovik. The cuteness and lack of subtlety inherent in many cross-universe stories is not present here and it's just long enough for you to love it and not tire of it. 'Letters," by Howie Weinstein, is a rejected script concerning the results of a two-week delay in the mail. There's a very touching subplot involving Winchester, which adds another human dimension to the character, making him more than just a rich Boston snob. Susan Hope Hochman's "A Woman's Place" is a good effort but incomplete, not fleshed out enough. It concerns the plight of a woman doctor who wants to work on the front but is barred by Army regulations. Mary Bloemker's and T.J. Burnside's art are the best in the zine. All of Mary's renderings of the M*A*S*H characters are excellent and most of T.J.'s are lovely, the best being a full page piece of Margaret in post-op. Recommended. [1]