Man of Iron is an unproduced script for Blake's 7 fourth season, written by Paul Darrow (who played Kerr Avon in the original show) who also notably wrote his own backstory for his character: Avon: A Terrible Aspect. John Kennard's A History and Critical Analysis of Blake's 7, the 1978-1981 British Television Space Adventure records that the script was "rejected as unsuitable"[1], however it's likely that this is overstating matters. According to script editor Chris Boucher this script was never officially commissioned. 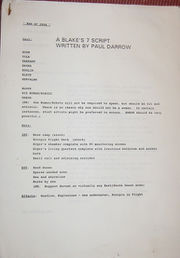 I never saw the script or knew anything about it until it was mentioned to me recently. It certainly never came across my desk at the time, and definitely wasn't commissioned by me. So why it was written and who it went to I have no idea, but as far as I was concerned it had nothing to do with the official scripting of Blake's 7.[2]

The plot loosely concerns an attempt by Servalan to regain power using androids created by the scientist Algor on the planet Epsilon.

Man of Iron is particularly notable from a fandom perspective due to the dramatic readings of the episode that have taken place at Redemption since 2001.[3].

perhaps the highlight of the con was the now-traditional dramatic reading of Man of Iron, which started in 2001 and now has to be scheduled in one of the biggest conference rooms the hotel has to offer, because the audience gets bigger every time. Now, Man of Iron is a never-produced script written for Blake's 7 by Paul Darrow, who played one of its leads, Avon, and, in the words of the person sitting behind me at the reading, it reaches levels of bad never before attained by humans. It was, alarmingly, the only specifically Blake's 7 item on the programming this year, and I'm pretty sure there were people watching it who had never seen any of the original show, but this doesn't seem to detract from the sheer joy of it. By now, it's becoming a sort of Rocky-Horror experience, with semi-formalized, semi-spontaneous audience participation (eg the explosion of applause and catcalls at the line Water is your ally, Tarrant! Water! Water!). Again, it's the sort of thing you could only get at a convention: it's a celebration of a shared world, a shared knowledge of genre conventions and their uses and abuses, and a shared mythology of Paul Darrow and his curious mix of self-delusion and canniness (one of the things that is most mocked by fans about Darrow's performance in B7 is his running; one of the things we love the most is his capacity for Beautiful Suffering; and the Man of Iron script consists in roughly equal measure of Avon running and Avon being beaten up). And the performance works so well because of its skilled amateurishness: more of a professional gloss would ruin the tone of it, and make it less of a shared experience between audience and actors (also, would we start casting according to physical type, and lose our fifty-nine-year-old, walks-with-a-cane, portly, white Dayna and our skinny, blonde, female Avon? Not to mention our mad scientist in a silver PVC knee-length kilt?); less skill in the performance and it wouldn't come across at all. [4].

Ah, Blake's 7. Walking cabbages, giant spiders, deadly candy floss (cotton candy) and some of the most disastrous costume decisions ever made.

How I love it!

It's one of the reason I'll be at Redemption this weekend. I'll even be playing Servalan at the traditional recital of Man of Iron. For those who don't know MoI is an unproduced script written by Paul Darrow and the only thing I've ever read which is worse tripe is his novel Avon: A Terrible Aspect.

Reactions and Reviews to Man of Iron Script

After that I went to the Freedom City party, had tea, ate crisps and a flapjack, and read Man of Iron - to myself at first, and then out loud by insistence because I could not stop snickering and the people sitting next to me wanted to know which bits I was laughing at. I still think it would have been better if Avon had landed in the arch-villain's bubblebath. Thereafter anyone who had been at the Freedom City party could get a laugh from any other attendee merely by raising their arm with a cry of "Gaydor!" or by comments such as "He is taking quite a beating" or "pump action shotgun". I was given the copy of the script I had read from, and it is truly awfully hilarious. I could almost feel sorry for Paul Darrow: I doubt he knows that his 1981 effort at script writing is being turkey'd 22 years on by happy fen. (But I do admit that if I were ever at a con with him, I might try to get him to autograph it.) [6]

The next thing I remember attending was the reading of "Man of Iron", the script that Paul Darrow wrote for Blake's 7. It's not a bad script. It's an atrocious script. The audience nearly fell off their chairs laughing at parts that was probably meant to be dramatic and exciting. Not to mention the probably not intentional slashbait in it ("TARRANT: For once you are on top, Vila. Enjoy it while it lasts."). Oh, and it uses pump-action shotguns a lot. In B7. In a script written by an actor who'd been making it for three years. [7]

Go to best attended event so far: reading of stunning work of art called Man of Iron. Audience helpless on floor in face of genius. Have learned many things:

Evil Overlords spend a lot of time in bubble baths

Tarrant is stupid enough to commandeer the party's only gun from the ship's acknowledged sharpshooter. (Hang on, I believe that....)

"Even Servalan is shocked at your perverted excesses (*pardon?*)

'Man Of Iron' Paul's writing shows he's clearly interested in the action sequences more than anything else. He enjoys a story on the run.[9]

I can understand why this script was rejected. If it had been used, it would not have been a good episode. It was too thin, and too predictable. As chevron said, one long chase scene. The most commendable bit was where everyone but Vila leaves Avon for dead, so Vila desperately forces them to return. Unfortunately this elevates Vila at the expense of the other characters. I do not really think they would have been quite that callous. Not Dayna, anyway. The continuing crisis with fuel is inconsistent with all the other episodes where it is never mentioned at all, and as it is rather central to the plot, that makes it rather hard to fix. Other elements of the plot make me wonder when he wrote it, since they seem to be very similar to other episodes: * Servalan plotting with Evil Genius is like ORBIT * The Ultimate Robot is like HEADHUNTER * the being-chased by an unstoppable foe is by no means new * robots shorting out in water. You'd think an Evil Genius would consider decent waterproofing, wouldn't you. It is quite possibly too violent, too. Besides lots of robots getting their heads blown off, you have Avon being badly beaten up, looking half-dead, and then the scene where Avon kills the Evil Genius with his bare hands by drowning him in the bath! (Part of a longer review)[10]

If I'd been the BBC, I'd have rejected it too, on the other hand if you enjoyed Avon: a Terrible Aspect, then you might well enjoy this. If you want a story that presents Avon as superman having great fun shooting lots of robots with a pump action shotgun, then this is clearly just the script for you. Although Paul Darrow did a superb job acting Avon, I personally don't think he writes well for him. The character who works best for me in this script is Vila. Bearing in mind the price, I can't recommend that you buy this, but you might want to borrow a copy out of curiosity.[11]

What I'm saying is, Darrow has written a BUARA A/V fic. And it could be worse.

Some of the dialogue is actually quite good. Not great, but quite amusing in lots of places (it helps that Slave is a good character). Indeed, for the first few pages I thought - I really don't see what the problem with this is! It's much better than I expected.

I also do like that there's this business with Vila insisting the others go back and rescue Avon, who is the final member of Blake's 7 (again - see, this is such a fanfic) and someone he trusts far more than the others. At the end Avon is told Vila is the one he owes his life to, and almost says thank you. I think that plot thread would work really really well in series 4, which obviously culminates in first the destruction of Avon and Vila's relationship, and then the discovery of the only other living member of the original crew. And there are trust issues, etc. I like this A/V stuff so much that I almost wish we could have kept it in a different episode. Bob Holmes could have written this idea, rather than 'Traitor', which is disappointingly dull.

The problem with the A/V plot as it stands is that it necessitates what I consider to be the biggest problem with 'Man of Iron'. The lack of a plot is forgivable, what I really don't like is that Soolin explicitly says she doesn't give a shit about Avon, and Tarrant has be held at gunpoint to go back and rescue Avon. This just doesn't seem like the series 4 Tarrant or the series 4 crew to me. Yes, they say they just work together, but they've clearly come to trust and rely on each other. What's interesting and powerful to me is not them hating on each other, but those moments where the others come to support Avon in his quest to avenge Anna or find Blake, or when they all go and rescue Vila in City. I don't want a whole episode about how Tarrant is glad Avon's probably dead.

Interestingly I assumed that Darrow would write a thing that made it embarrassingly clear that Servalan and Avon fancied the pants off each other. But what he's actually written is a thing where Avon has the shit kicked out of him, and Servalan says - well, I'm not interested in you any more, enjoy bleeding to death. It's very odd. I guess he likes Michael more.

What he has done is written a scene where Avon (having been badly beaten) pulls himself free of his handcuffs (I think. I might be making this part up, but I am not making the rest of it up), beats up a killer robot (again, unarmed), picks a lock, and then continues to beat up more robots. Also, he has a two-handed shotgun that he uses to kill more robots before it gets taken away. Guns over girls. Bros over hos. Etc.[12]