The Bane is a 95-page X-Files novel by A.C. Langlinais. It is in script form, and is a continuation of a shorter story (not in script form) (34 pages) that was in a 1997 issue of Texas Revelations. 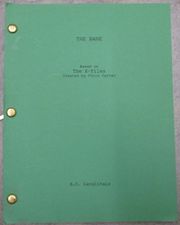 It is told from Dana Scully's point of view.

Some Comments by the Author

I started re-reading Henry Jenkins’ Textual Poachers yesterday, and that prompted me to look up fanzines online. I was curious, really, whether anyone still publishes hard copy fanzines, or if it’s all just FanFiction.net and that kind of thing now. I guess I was just feeling a bit nostalgic. I started out as a fanfic author, after all, and a young one at that — I would turn up as a guest at cons and no one would believe I was who I said I was. (Remember, they couldn’t just look me up online back then. Yes, I’m old.)

Anyway, one zine I was published in was called Texas Revelations, though it only had about four issues. And I stumbled on this Wiki site and, well, I was floored. I don’t know why. It’s not like anyone did a page about me specifically, but hey, I got a mention.

Perhaps I should mention that I used to be A.C. Langlinais. Back in the day.

Not only that, but someone made a separate entry for my undergraduate thesis project, which was an X-Files spec script called “The Bane.” There’s a photo of it. How did they even get a copy?! (To be clear, I wrote a short story version of “The Bane,” which is the one published in Texas Revelations. The story started as a back-and-forth writing project between me and my best friend Tara.)

I’m weirdly flattered. And a little freaked out. But mostly flattered. I was definitely more successful as a fanfic author, if by “success” one means “widely read and praised.” I didn’t make any money, of course, but I was asked to conventions and got a lot of great fan mail. Ah, those were the days. [1]