From a submission request issue #2:

...well-written stories, preferably from 1,500 to 40,000 words in length, in fandoms with limited outlets. For example, but not limited to: COUNTERSTRIKE, EQUALIZER, HIGHLANDER, LOVEJOY, MACGYVER, MIAMI VICE, NORTHERN EXPOSURE, RENEGADE, and WAR OF THE WORLDS. Our definition of limited outlets is any fandom with three (3) or fewer publishers. Cross-overs with more established fandoms may be acceptable. This zine will have a rating no higher than PG-13.

I picked up these small, nicely produced multimedia zines at MWC. [1] 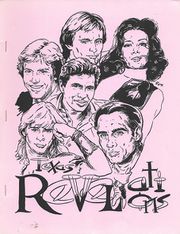 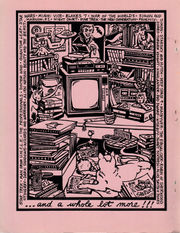 back cover of issue #1, Sherlock

Texas Revelations 1 was published in March 1994 and is 81 pages long. Cover art is by Ann Larimer; back cover is by Sherlock. Interior art is by Susan Leinbach, Mariann Howarth, Joy Riddle, Laura Miles, Margaret McNickle, and Erika Frensley 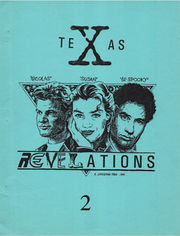 Texas Revelations 2 was published in March 1995 and contains 72 pages. The art is by Ann Larimer, Joy Riddle, Sherlock, and Erika Frensley.

The Star Wars crossover stories are rather nice. Leia, Han, and Luke interact first with Servalan and then with the rebels, but they're not exactly their "real" selves. Instead they are artificial beings created by the Clonemasters to help save the rebellion. Since no real person would have the qualities needed, they turned to fictional characters for prototypes. It works! [2] 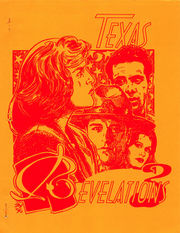 Texas Revelations 3 published in March 1996 and is 85 pages long. The art is sparse, but by Erika Frensley, Margaret McNickle, and Renae Ransdorf.

Texas Extra is a special edition of "Texas Revelations." It was published in 1997 and contains 59 pages. It is a "Special Langlinais Edition": Stories by A.C. Langlinais. Cover by Bonia Crider. Art by Joy Riddle.

Comments by the author:

I started re-reading Henry Jenkins’ Textual Poachers yesterday, and that prompted me to look up fanzines online. I was curious, really, whether anyone still publishes hard copy fanzines, or if it’s all just FanFiction.net and that kind of thing now. I guess I was just feeling a bit nostalgic. I started out as a fanfic author, after all, and a young one at that — I would turn up as a guest at cons and no one would believe I was who I said I was. (Remember, they couldn’t just look me up online back then. Yes, I’m old.)

Anyway, one zine I was published in was called Texas Revelations, though it only had about four issues. And I stumbled on this Wiki site and, well, I was floored. I don’t know why. It’s not like anyone did a page about me specifically, but hey, I got a mention.

Perhaps I should mention that I used to be A.C. Langlinais. Back in the day.

Not only that, but someone made a separate entry for my undergraduate thesis project, which was an X-Files spec script called “The Bane.” There’s a photo of it. How did they even get a copy?! (To be clear, I wrote a short story version of “The Bane,” which is the one published in Texas Revelations. The story started as a back-and-forth writing project between me and my best friend Tara.)

I’m weirdly flattered. And a little freaked out. But mostly flattered. I was definitely more successful as a fanfic author, if by “success” one means “widely read and praised.” I didn’t make any money, of course, but I was asked to conventions and got a lot of great fan mail. Ah, those were the days. [3]