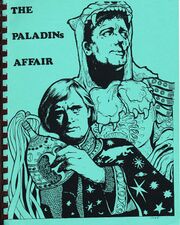 cover of issue one 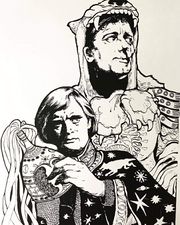 Both issues had a Man From UNCLE slant.

The Paladins Affair 1 was published in 1986 and has 204 pages. The art is by Connie Faddis, Maggie Nowakowska, Ruth Kurz, Signe Landon, J. Hindman, and Diane Hawley, Eileen Roy.

II. A Year in the Life

IV. And Finally, for a Happy Ending

[The B-Team Affair]: An A-Team/M.U.N.C.L.E. crossover featuring Murdock. Quite good if very, very, very strange story about some bizarre experiments at the V.A. [1]

[zine]: I found THE PALADINS AFFAIR (a special, mostly-UNCLE issue of the fanzine PALADIN) both curiously attractive and repllent at the same time. On the one hand, the stories are well-written and imaginative; on the other, some of them gave me the creeps! The gorgeous cover by Connie Faddis promises good art within; the zine fulfills this promise with illustrations ranging from good to excellent.

The "Napoleon, Solo Affair" (clever title!) by Jan Lindner has Mr. Waverly separating Napoleon and Illya because they work too well together. Shades of The Rack (infamous grief-guilt-agony Star Trek novel in which Starfleet tries to break up Kirk & Spock). Although I didn't find it entirely plausible, this story does provide a handy prelude to the incident hinted at in "Return of the Man from U.N.C.L.E." that caused Illya's departure. The illos by Maggie Nowakowski show a progressive fadeout of the original opening scene from the black-and-white series (Solo behind the bulletproof glass): a nice idea, well executed. The next story, "The Parting of the Ways Affair" by Bea Wise, follows Illya home to Russia after that incident, and concerns his decision to leave U.N.C.L.E. The author shows the different characters in his family very nicely.

I didn't like the next story, "Players of the Game" by Emma Lee Marion, partly because I'm not into Starsky and Hutch (or S/H, for that matter) and just can't see them as joining U.N.C.L.E., and partly because I didn't like the portrayal of Illya. This author has a tendency to show Illya as some kind of fanatic whose devotion to Napoleon provides his only stability, and I disagree with her interpretation of the character. If you like Starsky & Hutch, though, you may find this story interesting. Good illos by Ruth Kurz.

"The Final Lesson Affair" by Denetia Arellanes is a two-hankie death story. The author has a nice touch with sentiment - instead of letting the characters wallow in self-pity, she rescues the story from being maudlin by introducing some witty (and very naughty!) reminiscences. Ultimately it is touching, but not depressing. The illos by Signe Landon and E. Roy are sketchy but pleasant.

"The Prayer of the Hawke Affair" by [name used at Fanlore], was sweet, but I had a hard time suspending disbelief; Napoleon and Illya didn't seem to belong there. The characters of Isabeau and Navarre were well-shown, and Illya's concern over Napoleon's infatuation with Isabeau was an interesting subtheme. Dramatic action illos by the author, plus a portrait of Navarre by Robin Mujica, were an added attraction.

"A Year in the Life: Waverly's side of the story" by An Truh featured pages from Mr. Waverly's appointment calendar scattered through one section of the zine. There were many individual funny entries ("K. blew up lab again") as well as running jokes (for instance, Waverly's New Year's resolutions). I was utterly charmed - of course, I'm always charmed by Mr. Waverly.

"The Crab Apple Cove Affair" by Charlene Kirby is the first of the many U.N.C.L.E./M*A*S*H* crossover stories that I've read that doesn't take place in Korea. It's a nice story but I don't see much point to it. The author's illustration of a weary Hawkeye complements the story well.

"Solo Flight" by Diane Hawley and Eileen Roy was a nice Pern crossover. I liked the theme of the return of a sense of wonder, which was expressed on more than one level of the story. The use of humor was also effective in keeping the story from getting too sweet. Hawley's illos are precious, especially the one of Napoleon, looking slightly disgusted, feeding expensive groceries to a ravenous fire lizard.

"Fool's Mate" by Emma Lee Marion features a daring and original way to cross U.N.C.L.E. with Trek. Members of U.N.C.L.E. are put aboard a sleeper ship during the Eugenics Wars and are rescued many years later by the Enterprise - the ISS Enterprise, to be exact (from the "Mirror, Mirror" universe). At this point it becomes two stories. One is an exciting, suspenseful tale of the clash between the UNCLE team and the Enterprise crew. The politics of Empire aboardship and the relationships among the mirror universe characters are well delineated. The UNCLE team revived first, headed by Illya, includes a number of characters from other fandoms: most prominently, a shy telepath named Radar O'Reilly is engagingly depicted. Unfortunately, this is also another story: a particularly vicious get-Illya piece, both physically and psychologically. Illya is beaten up by most of the Enterprise crew, sexually abused by Sulu, and mind-raped by Spock. Moreover, Illya is already mentally unstable; Waverly describes him as schizophrenic and Napoleon recalls a mission on which Illya's devotion to Napoleon caused him to have a breakdown. I should hedge my criticism with some qualifications, however. Since this is an alternate universe apparently right from the beginning (UNCLE here stands for the United Network Command for Liberty and Equality), this portrayal of Illya is arguably an acceptable variant. And some violence is going to be necessary to a story set in this universe; but I found the brutality to exceed the bounds of necessity, to say nothing of good taste. The illos by E. Roy are done in a semi-abstract style, appropriate to the story.

"The B-Team Affair" by Eileen Roy has one mark of a really good crossover story: I enjoyed it immensely even though I've never seen the A-Team! The opening scenes with Murdock and Illya in the insane asylum were wonderfully funny. Diane Hawley's illos are excellent.

"The HoHoHo Affair" by D.J. Driscoll was a well-done, wickedly funny excursion into the utter madness of a group typing session. The cartoon-style illos, also by Diane Hawley, are as wacky as the story.

There follows a miscellaneous section consisting chiefly of material from other fandoms: The Equalizer, The Professionals, Scarecrow and Mrs. King, and Shadowchasers. I'll have to skip reviewing these 'cause I'm not familiar with the genres. There's also a nice trivia quiz and a pleasant and informative essay on Holmesian nonCanonical fiction.

Finally the zine concludes with "The Stitch in Time Affair" by Emma Lee Marion. This is billed as "implied same sex" but it's really slash with no sex scenes. (I would have rated her other two stories as "implied same sex.") This is a Sapphire and Steel crossover that takes advantage of Illya's obvious resemblance to Steel (David McCallum played both roles). It's also a love story in which Napoleon gradually realizes that he does want to make a commitment to Illya - even if it's for thousands of years. If you don't like slash, you won't like the story, especially the ending lifted straight out of Gaudy Night. If you do, you probably will. The question of slash aside, it's got an interesting plot and an unsentimental characterization of the mysterious elemental beings who struggle against time. There's only one illo, a portrait of Napoleon & Illya and Sapphire & Steel by (guess who!) Diane Hawley.

In conclusion, I would recommend this fanzine, but with reservations. If you strongly dislike violence or slash, you may not like this zine. Setting those considerations aside, however, the stories are imaginative, well-written, and well-illoed. I do think the ratings are a little understated: I would give the zine an "R" rather than the editor's suggested "PG-13." The editor very considerately provides warnings in the Table of Contents, labeling those stories which are violent, silly, implied same-sex, death stories, or, as in the case of the "HoHoHo Affair" - all of the above!" [2] 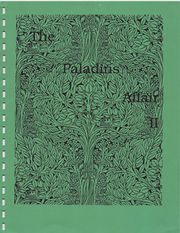 The Paladins Affair 2 was published in 1987 and contains 124 pages. The art is by Tammy Lomas, Bille Phillips, Charlie Kirby, Ruth Kurz, Connie Faddis.

The story "There is Another" contains implied same-sex content.

"I'm told that this zine was in production longer than I've been in fandom. If so, like Curtis Mathes, it's darn well worth it. All of the stories show a strong editorial touch (no endless repetition of "said idly," "said haltingly," or "said curiously," here!), creating a precise, consistent package. There's little artwork and filler, and no poetry, and the layout, consisting of generic double columns, is unspectacular, but the presentation is clean. Right up front, in the table of contents, this zine establishes its realistic, yet warped, personality, and I mean that as praise. Many of the stories are marked with a symbol to represent "excessive violence," "death," "revisionism," "implied same sex," "bad language" or "purposefully silly," so you always know what you're getting into. Persons of a Sensitive Nature will know which stories to avoid.... Connie Faddis' illustration was originally on the cover of Paladin's Affair 1, and inspired the story, "The Hero and the Sorcerer," in 2. The characters are in appropriate costumes and seem to be reacting to some danger outside the drawing's boundaries, creating more tension than in the rest of the artwork. On the layout and printing side, I occasionally found the clip-art over- or underbalancing a page, or an illustration to be crowded by the text. The lack of typos was refreshing, and the text legible. No strange blots or blurs occurred during printing, and all of the pages were in the right order. It's a serviceable format, neat, tidy and unspectacular. Some of the fen that I've talked with who had already read The Paladin's Affair 1 were somewhat disappointed with 2. I can't help but feel that their reaction is less a product of the zine itself than of the long wait. Overall, I found the whole zine cleanly presented, with a strong editorial personality, and thoughtful, character-driven stories. I'd give the stories a five, the presentation four, and the art three, resulting in a final rating of four. As Joe-Bob says, check it out." [3]

As far as the review of The Paladin's Affair Two - well, the preparation time seemed to take forever to me, too, but it was actually only two and a half years, and surely [C P] has been in fandom longer than that. Still too long, I agree, but in my own defense, I do not take any money until the zine is out and ready to be mailed; and orders are filled within two days if possible but never more than a week after receipt of the order. The clip art cover was too busy to read the title easily; when I reprinted, I blocked out the art so the title can now be read, but the printer left artistic white pages scattered throughout the zine-such is life. There are typos, I'm afraid, though I hope not many. And the fact that all the pages are there, in order, and legible, is. the printer's fault or blame, not mine, surely. As far as the art contents go, I plead guilty and apologize. I am not graphically talented. When my artist friend waxes over the gorgeous artworkin this zine or that, l am just as likely to say, "Artwork? There was artwork in that zine? Where? All defects in layout and composition are entirely mine. [4]