U is for U.N.C.L.E. 1 was published in 1983 (reprinted in 1984) and contains 90 pages. It contains two stories by Charlene Kirby and has art by Mary Starr and Charlene Kirby. 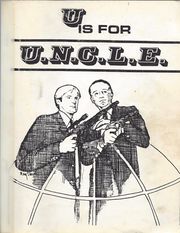 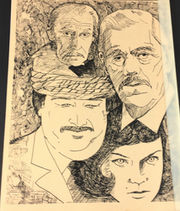 back cover of issue #1, Mary Starr

The recent MUNCLE TV movie has sparked a resurgence in MUNCLE fandom. For that, I am very grateful. MUNLE was my first love, and I still have a soft spot in my heart for Napoleon and Illya (especially Illya). So, when I saw listings for MUNCLE zines, I ordered one. Since I’m basically a cheap person, I chose a moderately priced one. Normally, I shy away from zines written by one person, especially if I do not know author. Charlene Kirby was not a zine author who I knew, but I took the chance anyway, and I was not disappointed. The zine was worth the money. There are only two stories in this zine: ‘The Vinea Vitreaus Affair’ and ‘The Ripping Good Time Affair.’ The first is the longer. It faithfully follows the series and is a good spy yarn with planty of action and pretty girls. The characters Charlene creates are believable and interesting. The story line is logical and flows well. I offer my kudos to Charlene for doing her homework on chemistry and wine making. I am not enough of a chemist or wine expert to know if she was exactly correct but it was good enough for me. I have a pet peeve about writers who are ignorant of their topic and therefore make mistakes. The second story was my favorite. It was also a good spy story, but it had an element of spookiness that I enjoy. All I will say about it is that it made me shudder at the end. One warning for the squeamish, it is a bit bloody. So much for the compliments. The zine does have a few problems. It was done on a computer and the dot matrix print took me time to get used to. My real complaint is the errors. There were far too many for a manuscript done on a computer that I presume has word processing capabilities. Then, there’s the art. It ranges from fair to not-so-good. The portrait-like drawing of Mr. Waverly, Napoleon, and Illya by Mary Starr are uninspired but solid. The drawings by Kirby, for the most part, adequate but did not reproduce very well. All in all, the zine is a good buy, and I recommend it to any MUNCLE fan. If you are hunting for good, solid spy stories, this zine will fill the bill. [1] 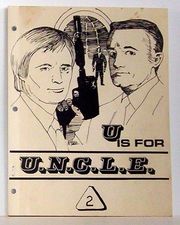 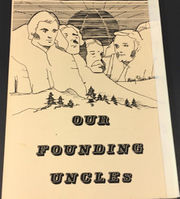 "This fanzine is dedicated to AT&T, ITT, the Xerox Corporation, and big business everywhere. Anyone who's done a zine knows what I mean." 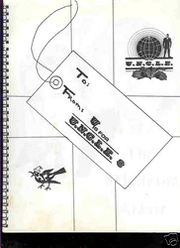 It is a holiday issue. The front cover has an illo of a gift tag which some fans/the editor filled in with the zine owner's first name. 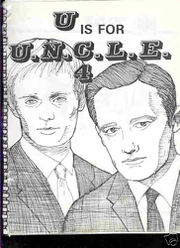 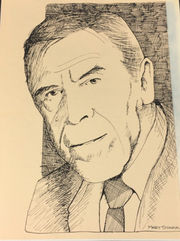 back cover of issue #4, Mary Starr 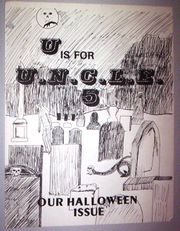 U is for U.N.C.L.E. 5 was published in 1985 and contains 69 pages. It was the "Our Halloween Issue" and has four stories by Charlene Kirby, artists Charlie Kirby, Denetia Arellanes & Mark Rogers. 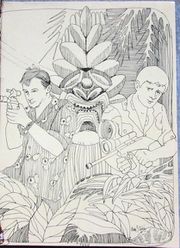 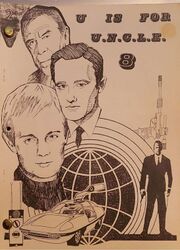 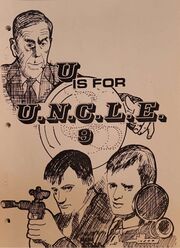 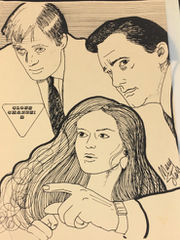 back cover of issue #9

U is for U.N.C.L.E. 10 was published in 1990 and contains 95 pages. It contains a single novella by Charlene Kirby called "The Cyanide Flats Affair." (Scientists are killing themselves and the only thing they have in common is nothing.) 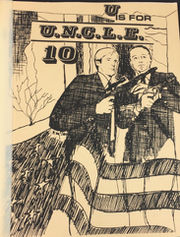 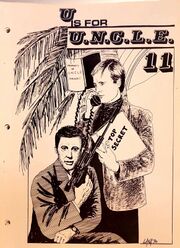