Del Floria’s Press is a gen Man from UNCLE anthology. 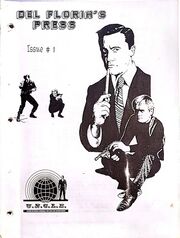 Del Floria's Press 1 was published in December 1986 and contains 105 pages. 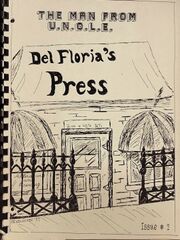 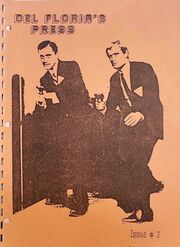 Del Floria's Press 3 was published in December 1986. The zine was printed four more times: June 1987, March 1989, November 1989, and October 1990. The editor noted that when the original masters had faded too much to use, they ended retyping the fourth issue. This means that the page count for the first three editions are larger than for the latter editions. The later edition has 43 pages. The editors reassured readers that no content had been omitted. 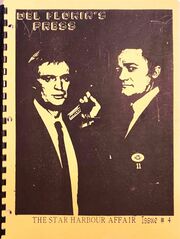 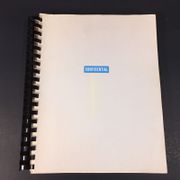 Summary from the publisher: "Things have not been going well in the field for Illya Kuryakin. If he didn't know better, he'd swear gypsies had put a curse on him. To make matters worse, he's looking at two years before he's retired from field work. Solo has Waverly's position to look forward to; all Illya has is a microscope waiting down in the lab. Mid-life crisis sets in. Determined to be the one to prove agents don't have to be retired at 40, Kuryakin takes on a deadly mission, one that feels so bad that for once even Solo refuses to go along. For Illya, the assignment is a matter of pride. To Napoleon, it just feels wrong."

This is not a visually lavish zine. You get the story, period. If you want a feast for the eyes, this ain't it; if your eyes can happily make a meal of words, thank you, you'll do fine with the presentation. Sasha Sokolnikov, I've found through reading a variety of her stories, is a solid, capable writer who can pack one hell of an emotional punch in her pieces. I may not always agree with her, but I can never stay disinterested. She has a fresh, unexpected slant on the UNCLE universe. Sometimes I'm left aghast, sometimes in awe. At times I go: No way! Other times I go: How exquisite! Which is my dilemma with The Bogota Affair. Noway can I ignore it, but I can't decide whether I hate to love it, or love to hate it. Do I believe it? I don't know. I know I want to believe it, because there's such a wealth in there for a "relationship," "hurt/comfort" fan, but I keep crashing into the wall of credibility.... Some laurels to add to the kudos; no miraculous recoveries, but realistic, long-time coping. Then we get one of those fresh slants. The canon of UNCLE seems to take it for granted that Napoleon is Waverly's protege and heir-apparent. Not so here. Intriguing twist. But it leads me straight into the next "wall." Will Waverly really leave the chair of Continental Chief to a man who is all but mainlining drugs, has flashback episodes, hasn't recovered from his ordeal and probably never will completely? Will the other continental chiefs let him? Will the line agents feel confident in going on with business as usual? The only answer I find is: No way—but that "wall" is the foundation for the most satisfying scenes of the novel: Napoleon's loyal support, his determination that lllya will succeed or Napoleon will die trying, his worries for his friend's physical and mental health under the pressures of the job, good stuff, good stuff, good stuff. I love it, I do. Don't wanna explain it. I just do. The air is the air. But there is also one of those unexpected slants that comes like a punch out of nowhere and leaves you dazed: lllya's vicious revenge for a firebomb thrown into his house. Yes, he has provocation, but I'm horrified at how far he takes it, and that Napoleon lets him take it that far, and that other agents don't say: we're not blind executioners, you want revenge that badly, you extract it. It's a dirty world they live in, I know, but isn't there supposed to be some shade of humanity to differentiate Our Heroes from the likes of THRUSH? In short (too late!), if you can take the curves the story throws you, in emotional wallowing/satisfaction, it is a gem. (Let me quickly point out that "wallow" is a complimentary word to me.).[1]

Del Floria's Press 6 was published in October 1987 and contains 99 pages. Cover art is by Charlene Kirby; interior art is by Sasha Sokolnikov. 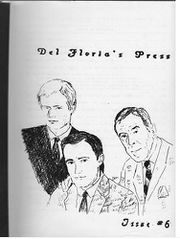 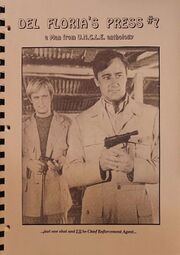