Rose Tint My World is a slash anthology. It was published by Tosya Stohn and Robyn LaSalle of Bodacious Press.

So these people had circuit stories, and the circuit stories of Man from UNCLE slash, were, Illya and Napoleon, are, have a homosexual relationship. They were so violent – and, I mean, I've watched this show, and these two men took vacations together, according to the show's creators they lived in the same building. There were episodes where, because they were supposed to be expendable, if one was in trouble, the other one was freaked out for him. His boss had to remind him: "You know, he’s expendable, and so are you." And it's like, "Oh, whoa, ok, so stop being so concerned for each other." And I said, "These two men obviously care about each other. I do not understand why Napoleon would tie Illya up with barbed wire, and rape him with his gun, to show him how much he loved him... And it was so horrifying [personal things redacted] I wanted love. And that was so horrifying and Paulie and I were, you know, started a relationship. And we decided we were going to show fandom what gay love was really about, you know, romantic love, could be about. It wasn't about what came below the belt. It was about what came from the heart and the spirit. And so we produced "Rose Tint My World", and it was the first romantic slash that, had ever been, you know, on Man from UNCLE. It really broke ground. And then suddenly other people started doing this too. [1] 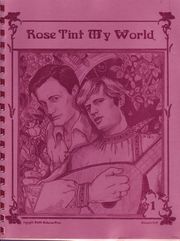 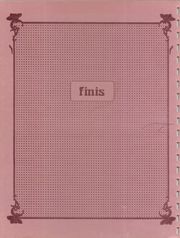 Rose Tint My World 1 was published in May 1989 and contains 140 pages. The cover is by KOZ, and interior art is by KOZ and Anji Towski.

Issue 1: From the Editorial

When we first came onto the UNCLE "/" scene, we were a little confused by some of the fiction on the circuit. There were some lovely stories, but -- in turn -- there were also some of the most vicious and unusually kinky and sick stories, as well. PLEASE, we're not making a judgement here, we don't want you to think that! What we're saying is, we didn't understand how -- when on the show itself the affection and loyalty between the two agents was clearly and unquestionably apparent — people could write one of the men raping, torturing, hurting, or punishing the other. Excuse me, but as a person who's been there, I (Tosya) do NOT find rape amusing, entertaining, or fun. Ditto that! -- Robyn.

What we decided to do was represent a more positive aspect of the relationship: love.

While the two men were not depicted as homosexual on the show, we all know that if one wants to find indications of that condition one can interpret the most innocent look or touch as one of deeper meaning. In short, the average Slasher can justify anything in their mind to make it real. We ask you to justify this:

Taking Into consideration the friendship, concern, love, loyalty and sense of humor Napoleon and Illya displayed towards one another on the series, imagine -- if you will -- the two taking one more step and turning an already intense friendship into an equally intense love relationship. One without the knuckle-biting guilt so many "/" writers seem to feel must be present in a gay relationship....

What we have compiled here are a series of eleven stories, wherein you can enjoy the undeniable love between two strong-willed rascals who just cannot seem to keep their hands off one another. The one exception is "Maritya" by Zach. Though it does not fall into our exact guidelines — the one where we state we are accepting stories of love and lovemaking between the two men ~ we felt that it was such a sensitive work and such a milestone for that author that we wanted to run it and share it with everyone.

You will not find Fukkum in the Elevator' stories In ROSE TINT. We have to assume that the two top agents of the U.N.C.L.E. are intelligent and adult enough to know when it's play-time and when It's work-time. Just because they lust after each other doesn't mean they've taken leave of their senses of decorum and good judgement — it would not be wise in that stage of our culture (the 60's) or any other to present date. Where Hetero-folk might

be willing to put their Job on the line with such frivolous behavior (one can always get another job, right?), for the homosexual, the price is a wee bit more dear. We just don't feel that they would risk exposure that would jeopardize their livelihoods, and certainly assure deportation for the tantalizing Russian.

Our zine features only two artists, this time around: KOZ (cover & illos for CITY OF BYZANTIUM: cover & illos for ONE NIGHT STAND; assorted illustrations in both COMRADES II and EXPOSURES II), and Angi Towski (illos in COMPROMISING POSITIONS 1, COMRADES II, &, TALES OF TWO UNCLES II). Our two artists parleyed on the lay-out of this zine. Aside from fillers, they agreed to use the same medium for all the title illustrations. They felt it would give the zine a visual continuity. For those of you who are curious, the medium is pen/ink, croquill paper, and Berol Prismacolor pencil (black).

We wanted to share the croquill paper with you all, especially you fellow zine-eds and publishers. It eliminates the need for expensive photo screens that art rendered in pencil or wash requires in order for the gray tones to reproduce. (Such PMT screens run anywhere from $10 to $15 each, and while beautiful, add extra dollars to the cost of an already expensive publication.) The croquill paper has a rough stipple surface, which will hold a solid pen lino, but when you use tho black pencil, the gray is broken up in a dot-matrix pattern very similar to the photo screen. That both amazes and delights us as our collective coin purse often has more cobwebs than coins. We are told that it can be purchased at an commercial art store or one which sells drafting or blue print supplies.

Smarm. PWPs. Smarmy PWPs. Precious little angst or even the vaguest of plots. If you know me, you know that this was *not* the zine for me. I felt like I was drowning in plotless smarm. {shudder}

Well, unless you count the very last story in the zine, which was a dark and depressing almost-gen story. There's no hint of unrequited love here, since Illya wasn't in love with Solo, and Solo is hopelessly straight in this story. I can't imagine just *why* this story was printed in a Solo/Kuryakin "/" zine, but maybe the publishers considered themselves short on stories. {shrug}

I will say that this was certainly a 'pretty' zine - the cover was gorgeous, as were the many illustrations inside. The cover and binding were both dark mauve, and the pages were a soft pale pink. Quite lovely. It seems this continues in later editions, since I bought issue #3 solely based on the fact that the cover and pages were all a beautiful lavender color. However, I enjoyed the 'theme' of issue #3 much more than I did that of this issue. The 'theme' seems to have been 'Hearts and Flowers', but it was just too much so for me. Give me angst and an actual plot along with the romance and passion every time. [2] 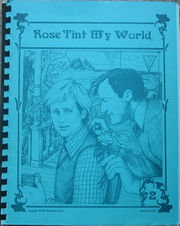 Rose Tint My World 3 was published in March 1991 and contains 195 pages. It has art by KOZ (front cover and interior), Himane, Adrian Morgan, and Angi Towski. 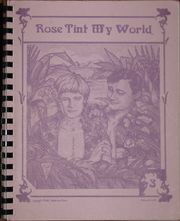 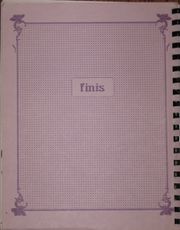 This collection of Solo/Kuryakin stories, with their tropical theme, is just delicious! Some *awesome* drawings in this zine. My favorite story (which I've read more times than I can count!) is 'What You Wish For' by Theo Rezik. The story is enough to make you weep, it's so poignant and beautiful, and the illustration by Koz, I can guaran-damn-tee you, will make your heart stop! {Happy sigh!} [3] 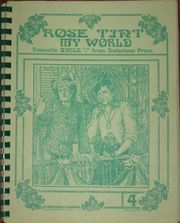 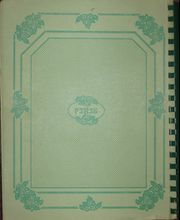 Rose Tint My World 4 was published in 1992 and contains 218 pages. The art is by KOZ (front cover and interior), Maureen B., Dover, Adrian Morgan, Nola-Frame Gray, and Angi Towski.

From the submission request in issue #3:

Once again it's time to look forward to our next issue. Putting our curly heads together, we came up with the theme of "Festivals Around the World," Since our frisky boys are worldwide travellers, we thought It might be nice to have some stories and adventures taking place in far away places with the added spice of a carnival or festival of some sort.

While we do not expect our stories to be exclusively festival~oriented, we do hope that at least a few of you will give it a shot.

What we mean by festivals can include anything from Carnival del Rio to Oktoberfest; Mardi Gras to Mexican Day of the Dead; Chicago's Lilac Festival to a good ol' down-home Texas Chill Cook-Off. A state fair. A local test. Anything! Always trying to bring you different ideas, we have now decided to open to alternate universe, fantasy, and cross universe stories — within reason. That means we welcome Vampires, mythical, and beast-people to name a few, if you decide to try one of these, do take the theme of the issue Into consideration if you can.

As always we welcome poetry and art. Please contact us if you are willing to do a title illustration.

We would like to have issue 4 for ZEBRA CON this Fall. So, our deadline for first drafts is July 15th; art: August 15th. That gives us the rest of July through August for data entry, and September for layout/printing.

We are happy to announce that we already have three stories lined up for issue 4 and again we want to thank you all for supporting us so well. Until next time, love is the answer.

Another year, another issue. Would you believe at first we were worried we wouldn't

have enough to make an issue?! Then things started coming in and here we are.

I want to thank all our writers who brought us such great stories this time, and particularly to the authors of our two novelettes. Both are very entertaining stories worth reading for all their length!

Robyn wanted me to stress to you that her piece, Our Generation is by no means to be taken as canon. It is simply a "what if..." story offered for the reader's entertainment.

This is our last THEME issue for a while. Next time we'll be returning to all kinds of stories in a slash vein. Still I want to thank everyone for making an effort to follow the last two issues' themes.

This issue sees the beginning of our Fantasy section, Studio de la Fantastique.

We hope to get some interesting AU stories for that, in the future.

This issue also has the dubious honor of being Kazuo's farewell to the UNCLE Genre. I'm sure you'll join us in wishing her the best in her future endeavors as she moves on m through Fandoms winding corridors, looking for the door to the Pros.

We will be slowing down to one issue of Rose Tint a year, now. Our equipment can't take the strain. At such time as we can afford all-new machines, we might double up again, but right now we have to pull in the old belt.

I believe we'll stay with a late May schedule, so those inquiring into new issues should check around April or so. 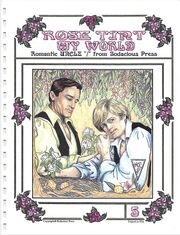 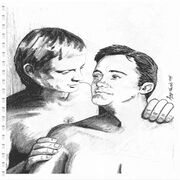 inside pages from issue #5

Rose Tint My World 6 was published in October 1995 and contains 170 pages. KOZ is the front cover artist. It has art by by KOZ, Seraph, Dover (clippings), and Angi Towski. 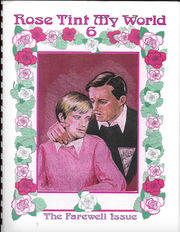