GEnie (the double initial caps are an integral part of the name) was a text-based online information and social-networking service created by a General Electric subsidiary, and operated from 1985-1999.

Its offerings included early versions of MMORPGs, message boards, chat services, and file-sharing archives. These were grouped by subject matter (astrology, gardening, photography, etc.) so that each interest group had its own RoundTable, with its own sysop/moderator. While several of these RoundTables (such as Games and Showbiz) attracted fannish interest, GEnie is primarily remembered in fandom as host to the SFRT (Science Fiction RoundTable), which in turn hosted a great variety of fan and professional communities devoted to science fiction literature, film, television, and other media.

From an Undated Flyer

From a flyer (sometime after 1987) geared for Star Trek: The Next Generation fans:

If you have a computer and a modem, now you can chat directly with the cast and crew of Star Trek On-Line! with GEnie Information Service. 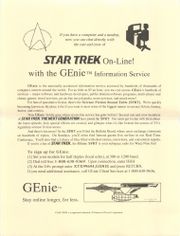 GEnie is the nationally acclaimed information service accessed by hundreds of thousands of computer owners around the world. For as little as $5 an hour, you too can access GEnie's hundreds of services -- major software and hardware developers, public-domain software programs, multi-player and classic games, travel services, an online-line encyclopedia, news services, and much more!

For fans of speculative fiction, there's the Science Fiction Round Table (SFRT). We're quickly becoming known as the place to be if you want to meet some of the biggest names in science fiction, fantasy, horror, and comics.

Now GEnie boldly goes where no on-line service has gone before! Several cast and crew members of Star Trek: THE NEXT GENERATION have joined the SFRT. Our users get to chat with them about the latest episode, now special effects are created, and glimpse what it's like behind the scenes of TV's legendary science fiction series.

And there's lots more! In the SFRT you'll find the Bulletin Board, where users exchange comments on hundreds of topics. On Sundays, you'll often find famous guests live on-live in our Real-Time Conference. You'll also find a Library of files filled with short stories, interviews, and convention reports.

If you're a fan of Star Trek, the GEnie SFRT is your subspace radio for Warp Nine fun!

Somewhere in 1986 I got online, first on Compu$erve, but there's a reason everyone who's ever been a member spells it that way -- $12.50/hour, ouch. GEnie was much cheaper, only $6/hour during evenings and weekends, so I moved over there and stayed pretty much until the place shut down. (GEnie rocked, it was the best online service of its time, but management was a pack of idiots and its corporate parent, General Electric, never cared about it, so management ran it into the ground and then wandered away.) [1]