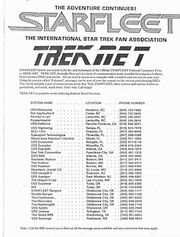 Despite being an important site of fan discussion and interpersonal connection, they were often considered a poor mechanism for sharing and archiving fanfiction. Yet, for example, the main Willow/Tara (BtVS) archive Different Colored Pens is hosted on a The Kitten Board message board. Alternatively, message boards were frequently used for Round Robins and roleplaying; there are still some forum-based RPGs ongoing.

The use of fan-run message boards for hosting fanworks lessened greatly with the dispersal of fandom to social networking and archiving sites such as Livejournal and Fanfiction.net, and with the loss of free services such as Inside The Web[2]. But as television and production companies became more internet savvy, discussion forums began appearing on official television show sites[3]. Fan-run sites like Gateworld often have close ties to the producers of the source program. Their discussion forums often host vibrant discussion of the source, fandom and fanworks and, in the case of shows like SGU that never took off in media fandom, these forums have a lot more traffic than their counterparts on journaling sites.

Collaborative vidding groups often used forums to coordinate MEP signups and submissions. While many of these groups later migrated to Discord, some still use private forums.