From Fanlore
(Redirected from Media fandom)
Jump to: navigation, search

The term media fandom first appeared in the 1970s to describe fans of televised or filmed science fiction as opposed to literary science fiction, but is now often applied much more broadly. It is an umbrella term that encompasses an eclectic assortment of individual fan communities that share values, practices, vocabulary, and history. 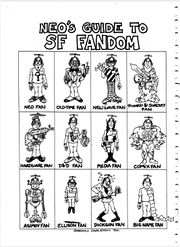 Although the terms media fan and media fandom originally referred to science fiction media, as media fans got into new fandoms and published media fanzines for buddy cop shows and other non-SF media they liked, the scope of media fandom broadened. Media fen have also adopted books, comics, video games, anime/manga, and real people as sources for their fanworks. On the Internet different fan communities with different histories were more likely to discover each other, and culture clash could result when media fans showed up to a new fandom that already belonged to a non-media-fan tradition or was a threshold fandom or a standalone fandom. By the time the Organization for Transformative Works was founded in 2007, many livejournal fans in acafannish and meta fannish circles seemed to be using media fandom as synonymous with fanworks fandom (an awkward term no one really loves).

A threaded discussion in the comments to the 2007 otw_news post An Introduction to the Organization for Transformative Works revealed that different areas of even livejournal fandom defined the term differently. Comments from an anime fan, a bandom fan, and a vidder:

I have one wording worry about the current website. Number one under Values says "We value media fandom". Now, the valence of this term may be changing, as fandom terms do, but the meaning I'm familiar with for "media fandom" is specifically the fandoms of domestic TV shows and movies.[1]

At least to the people I run with, RPF and media fandom are not the same thing. "Media fandom" is a term we use to specify, broadly, FPF fandom or, more narrowly, TV and movie fandom, so when OTW specifies "media fandom," we go, "Oh. Not talking about us!"[2]

Media Fandom is an umbrella term, encompassing RPF, and that has been there since the 1970s.[3]

(As a result of the discussion, sidewinder started a poll to see how RPF fans defined the term. The copy posted by Laura Hale on bandslashmania had mixed reactions.[4])

The term media fandom is often confusing to fans who joined fandom in the Internet era.[5][6] Especially the "media" part of the term leads to all kinds of conclusions that don't necessarily reflect the usage within media fandom. For example multimedia in media fandom has the same meaning as multifandom[7], which is not something anyone not familiar with the term would guess.[8]

Betty: What? I'm confused! Doesn't multi-media usually mean "Hey, look, I made a half-fanfic, half-vid chimera!" like it does out in the wild?

Arduinna: Not traditionally; it wasn't really possible to mix media formats until very recently, so what it meant was a mix of media sources. (It's the same use of "media" that gave us the term "media fandom" as "fandom that encompasses many media sources, not just one".)[9]

In 2010s online discussions, the term western media fandom is increasingly used instead of media fandom in order to avoid confusion with anime fandom, another creative fanworks-producing fandom that is focused on a type of media.

Some fans question the applicability of the term media fandom to modern online fan communities.[6] In a 2011 post, Franzeska argues that the present-day online fandom sometimes labeled media fandom is not wholly descended from the offline media fanzine culture; early X-Files fandom is known to have had a strong influence on modern online fandom, and early X-Files fandom predates the migration online of old-school media fans.[10]

In some places, media fans and media fandom are still used in the context of science fiction.[11]

One view of media fandom is that it broke off from science fiction fandom with the popularity of (and, perhaps, most importantly, the cancellation of) Star Trek. Those who were to become media fans were both more likely to be female than the male-dominated science fiction community and, also, more interested in the characters and relationships depicted on the television series than they were by the futuristic technology it offered.[12] Although there were plenty of men enthusiastic about Star Trek, these fans were more likely to be accepted into the existing sf fandom.[13] In a 2011 interview, Paula Smith recalled,

The SF guys didn't want to talk about things that women were interested in. Buck Coulson, an SF (and U.N.C.L.E.) writer, used to say, "There is no subtle discrimination against Trek fans in science fiction—it's blatant." And the women said, "The heck with this," and started making their own zines and organizing their own conventions.... Trek fandom was the mirror image of science fiction fandom. I would say 90 percent of science fiction fandom at the time was men and 10 percent was women, and there was a reverse 10-to-90 men-to-women split in Trek fandom. The two groups quickly diverged; after a while, only about 5 to 10 percent would shuttle back and forth between the two fandoms.[14]

The Man From U.N.C.L.E., a television show that went on the air two years before Star Trek, is also referenced as a possible starting point.[15] Star Trek fans mingled with Man From U.N.C.L.E. fans and then went on to adopt both Star Wars and, in what proved the most definite break from science fiction fandom, Starsky & Hutch (a cop show set in a contemporary analogue of Los Angeles) as source texts for their fannish engagement.

Apparantly even fellow fans call you a weirdo if enjoy a hobby and prefer to be active in your enjoyment instead of being a couch potato. Why do media fans have to put up with this kind of attitude? If I knew the names of every person to have played for Manchester United football team, nobody would blink twice, but if I produce a Blake's 7 fanzine then I'm a fanatic and not really a 'normal' fan at all. [16]