Fan Fiction and Fan Communities in the Age of the Internet 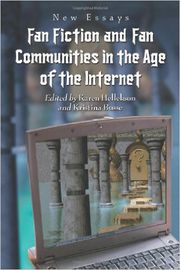 Fan Fiction and Fan Communities in the Age of the Internet is a collection of acafannish essays edited by Kristina Busse and Karen Hellekson. The book, published in 2006, attempts to update earlier fan scholarship by Camille Bacon-Smith, Constance Penley and Henry Jenkins by looking at how fan culture has expanded onto the internet and by examining such relatively recent phenomena as "fan culture revolving around mailing lists and blogs", "the growing acceptability of a contentious subject position", and "the community-centered and fraught nature of the creation of fan texts."[1]

The essays in the book are all written by fans who are also academics, and the book attempts to "use fannish practice as a model for academic practice" by seeing itself as a WIP rather than as providing definitive, permanent answers.

In 2007, Princessofgeeks posted chapter-by-chapter summaries/reviews[2] of all the essays, providing an invaluable resource and a forum for discussion.

Part 4. Medium and Message: Fan Fiction and Beyond

This is like the 21st century version of Textual Poachers: it talks about fandom, the nature of slash, the way that fic is created, gender, masculinity, romance, performativity, all that stuff - but takes into account internet communities and emerging forms of communication and media. This essay collection has all the big names in fandom studies right now. [3]

Coppa notes, "The movement of media fandom online, as well as an increasingly customizable fannish experience, moved slash fandom out into the mainstream."

Then the internet also allowed a kind of cross-fertilization of media fandom with the already-established comics, celebrity fandoms, music fandoms and anime, which were also moving onto the net, but which have their own independent histories. (She notes that the word "fan" was first used for members of the theater audience who came to admire the actors rather than the play! Fan culture surrounding rock music has been well documented as a separate field of study.)

Coppa notes something I found fascinating, which is that it's never been uncool to be a fan of movie stars or bands, and that that kind of fandom is encouraged by mainstream magazines like People and channels like VH-1, yet mainstream culture looks askance at media and SF fandom. Hmm. Tells us to get a life and so forth. Hmm.

She notes the emergence of RPS in popslash, focusing on Helen's story "The Same Inside," from 2001, a genderswap fic, saying, "Helen reimagined celebrity erotica through the conventions of speculative fiction, making boyband fiction explicitly about gender and about genre."

She says, and I loved this: "Media fan-writers ... explore[d] celebrity culture as a metaphor for gender identity and other performances of the self."

This, I think, is lovely and succinct and true, and it's amazing, because that's exactly what I unknowingly did in Lotrips. I never stopped to think about it, but that's what I was doing. [much snipped] [4]

This is an essential book for anyone interested in contemporary fan communities and their creative products: fanfic (including slash fiction), fanvids, online RPGs, and much more. The writers are all both active fans and credentialed academics, and the book as a whole maintains academic rigour while remaining clear and comprehensible to readers who don't know the jargon.

For members of fan communities, the language and activities described will be familiar. For those who are new to this subculture, Busse and Hellekson's introduction gives a succinct and readable account of the intellectual genealogy of fan studies while outlining the state of internet communities at the time of writing (admirably avoiding the common danger for books about the internet, the making of grand claims for a landscape that will be out of date by the time the description is in print, by emphasising the history and time-sensitivity of the world they describe), and Coppa provides a history of science fiction and media fan communities as they developed into the cultures which all the essayists examine and explore.

Each of the essays presents a snapshot of fannish life, considering the communities which form around fan fiction writing, video making and other activities through fresh and interesting theoretical lenses. I was particularly intrigued by Coppa's reading of fanfiction as performance, Busse's and Lackner, Lucas and Reid's examination of writers' and readers' interactions as potentially and sometimes problematically queer acts, and Willis's depiction of slash fiction as making space for queer subjects in normatively straight textual worlds, but others will find different selections from this smorgasbord of literary and cultural analysis to be most appealing. [5]

I am not an academic, but I found this book very readable. Beyond that, it was inspiring to read such a diversity of thought about the fannish culture to which I belong. Unlike the few other books I've read about media fandom, I wasn't just nodding my head and thinking "Yes, I know this already." Several of the essays introduced new ideas, new ways of thinking about fans and how we interact with one another and with our texts, that were not just novel to me but well-argued and fascinating.

My particular favorite was the essay that suggested a view of canon, fanon, and fan-created texts as part of an "archive" of a particular show, movie, or book, erasing the boundary between canon and fannish creations in a way that is, IMO, nothing short of revolutionary.

Unless you are an academic steeped in modern modes of literary criticism AND an afficianado of Star Trek/Buffy slash fan fiction, don't waste your time on this book.

All of the authors write in an academic style that will be stultifying and unilluminating to even a well-read reader. The promise of the book's title is never fulfilled due to the focus on reviewing and citing the prior works of other academic authors.

The book is further marred by the repetition of a false assumption -- that ALL romance novels are of the Mills & Boon/Harlequin style. This assumption is not only wrong, it is grossly wrong. The Harlequin style has not dominated the romance novel market for more than twenty years, as even a cursory glance at any bookstore (new or used) would attest. This blatant error -- used as the basis of more than one argument in the book - casts doubt on ALL assertions made by the authors. If such an easily-verifiable or refutable assumption is made in error, one must wonder what other significant errors are being made, especially in the far-more complex and layered world of fanfiction? [7]

One of the things I found particularly interesting (and enjoyable) about reading this book was how it mirrored discussions held with fan communities about what they do. Along with a helpful bibliography on fan studies, and more than one review of fan fiction history (its origins as well as academic study on the topic) there are various, sometimes contradictory, perspectives on the writing of fan fiction. These discuss the various forms it can take, and what models the writing fits into. Also very interesting is the history of machinima, one of fandom's latest art forms. A bit academic for the layman but still a useful introduction to those not familiar with fan fiction studies. [8]