A buddy cop fandom is a fandom based on a buddy cop television show or film, usually starring two law enforcement agents, or one law enforcement agent and a civilian. The two "buddies" usually have a key difference in their background or personality, and this becomes a source of conflict which must be overcome in order to create a strong, mutually respectful partnership. Because these shows and movies are historically aimed at a male audience, the two main characters tend to be male.

In short, if the fandom fits into the "They fight crime!" [1] model, then it is probably a buddy cop fandom. 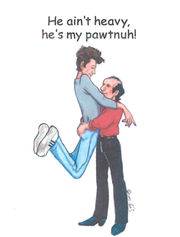 Sometimes interpersonal conflict in the buddy relationship is caused when a law enforcement character is forced to work with a civilian character, such as a scientist, academic, or even a reformed criminal. If the two characters are both in law enforcement, they may be of different nationalities (as in The Man From U.N.C.L.E. or due South) or of different ethnic backgrounds (as in Rush Hour or Lethal Weapon) or they may just be different personality types, such as an uptight, by-the-book cop being paired with an unorthodox, street-smart cop.

Once the two characters have been established, the general thrust of a buddy cop show or movie is they are forced to overcome their personal differences and bond with each other in order to achieve their goal. This genre is, therefore, extremely popular with slashers.

Buddyslash has become a catch-all term in fandom for any pairing between two characters that, canonically, are close friends in this manner.

The buddy cop fandom usually features several important episodes (often season or series finales) which are ostensibly devoted to solving crimes, but are actually about the importance of the relationship between the two buddy cops. Some examples would be The Sentinel's "Flight," in which Blair must decide whether to stay with Jim in Cascade, or take a career-enhancing job elsewhere, or I Spy's "It's All Done With Mirrors," where Kelly is brainwashed and programmed to kill Scotty, and Scotty refuses to believe that even mind control could make his partner actually harm him.

Buddy cop films were a popular subgenre of action movies that peaked in the '80s.[2] Examples of popular American buddy cop films include 48 Hrs., Lethal Weapon, Tango & Cash, the Rush Hour trilogy, and some of the Die Hard films.

More recent examples include films ranging in tone from L.A. Confidential to Hot Fuzz. Hot Fuzz both affectionately parodied and embraced the genre's tendency to treat buddy cop relationships as if they were romantic courtships, becoming an almost meta-buddy-cop film, as its main characters both draw inspiration from movies like Bad Boys II and Point Break.[3]

In some circles, "buddy cop" has become shorthand for a particular kind of (usually male/male) relationship, regardless of the professions of the characters involved or the presence of a strong supporting ensemble. For instance, as when Angel's Cordelia Chase says of her friends Wesley and Gunn:

Therefore, there are many shows which are not technically buddy cop shows, but do focus strongly on the evolution of a close relationship between two main characters as they work together to fight evil. Some of these fandoms are extremely popular with buddy cop fans and many feature examples of buddyslash. When the main pairing is het, the show usually focuses on UST, eventually ending up with a canon relationship between the two characters.

A darker version of the buddy slash relationship occurs in a TV show or movie where a law enforcement agent goes undercover with a group of criminals, and against his (or her) will becomes drawn into a relationship with one of the criminals. The tension in the narrative is produced by the law enforcement agent's internal struggle between their duty and their closeness to the "bad guy," who may not actually be that bad. These relationships usually end in betrayal and sometimes even death, so they are generally not popular with buddyslashers who prefer more positive buddy relationships, but they often spawn mini-fandoms of their own. Some examples include:

It is fairly common in American TV shows to have a mixed-race buddy cop duo, usually a black/white one, such as in I Spy, Miami Vice, or Psych. These buddy cop pairings often get less fannish attention than shows with two white main characters. The main pairing for the fandom, if there is one, is often the white main character paired with a supporting character instead of their black partner. In Psych fandom, for the first few seasons, the fandom mainly focused on gen, het or Shawn/Lassiter, with only a small handful of Shawn/Gus fanworks. In Miami Vice fandom, Sonny/Castillo has historically been the most popular pairing. See also: Race and Fandom.

Because buddy cop shows are traditionally aimed at a male audience, the characters are usually single or divorced men, allowing them to date a series of gorgeous women. However, since these shows are not interested in "tying down" their male characters, the female romantic interests are generally disposable BOTWs who either die, turn evil, or disappear at the end of the episode. Some early buddy cop shows, like I Spy or Man from Uncle, have no female 'regulars' or even recurring characters. If a buddy cop show does have a regular female supporting character, they often fall victim to character bashing, such as Carolyn, Jim's ex-wife on The Sentinel.

White Collar is a rare example of a buddy cop show in which one of the main characters is happily married. Peter's wife Elizabeth is canonically very supportive of the Peter/Neal buddy relationship. Probably because of this, White Collar fandom chooses to include her rather than conveniently killing her off or demonizing her, meaning that White Collar is one of the rare fandoms whose main pairing is actually an OT3.