Straight to Naughtyville is a slash Invisible Man fiction anthology.

This zine get its title from a line Darien utters in the episode, "Perchance to Dream," after Bobby makes a sexual innuendo: "Why is it al ways straight to Naughtyville with you?" 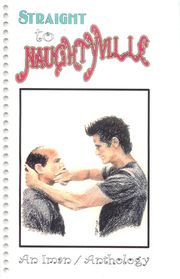 Straight to Naughtyville 1 was published in October 2001 and contains 168 pages. t is digest-sized, with spiral binding. TM Alexander is the front cover artist. Interior art by TAM, KOZ, Peej and H. Ann Walton.

Reactions and Reviews: "These are...nice. Nothing spectacular, just average stories. The formatting and layout are fine, the artwork could be better but they're overall, decent zines. Out of all the I-Man zines, these are probably the best." [1] 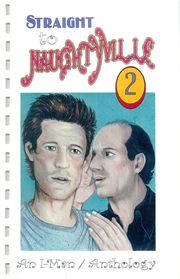 Straight to Naughtyville 2 was published in May 2002. It is digest-sized, with comb binding and contains 140 pages. Color cover by P.J. Alexander with interior art by TM Alexander, TAM, and P.J. Alexander .