From Fanlore
(Redirected from Character bashing)
Jump to: navigation, search

More subtle bashing in fanfic has been referred to as Character Assassination, where the misrepresentation of the character is done in small bits and used in a way that seemingly works for the story. Some readers don't catch on until after they've read the fic. [1]

Also note that some hatefics are intended to express dislike to the entire fandom using any means, including the character death mentioned above. For example, a person who believes that the Harry Potter series promotes the occult will write a hatefic in which the characters promote the occult.[2] 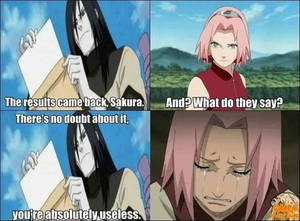 "I think it’s safe to say Sakura is the most hated character in the entire Naruto universe and arguably the most hated character in the whole manga/anime universe. Why? Because she is useless. There’s actually no other way to put it. She’s absolutely, 100% useless. -- Before I go any further, I just want to state that this isn’t going to be an article bashing Sakura."[3]

Penalties for character bashing range from removal from forums[4] to banning from communities[5].

Expressions of dislike frequently come in the form of death stories, where the character is killed off, sometimes repeatedly, often in a manner intended to be black comedy or darkly humorous.[6] There are communities dedicated to killing disliked characters.[7][8][9][10]

While some fans point to the omnipresence of female-character bashing as evidence of misogyny within fandom, male characters get bashed as well. One Star Wars link collection that was last updated in 1999 lists 56 Jar Jar Binks hate sites from Ways Jar Jar Binks Should Die to the Kill Jar Jar Binks Game[11] and the fan reaction to the introduction of Joxer in Xena: Warrior Princess (as a potential love interest for one half of the femslash OTP) was so bad that fans repeatedly killed him in fanfiction and created several kill Joxer sites. The actor recalls in an article: "the fans were ready to lynch me! They were saying things like, 'Kill Joxer!' Someone had a column that came out every three days and it would say, 'Here's the 11th way to kill Joxer...' and it was full of these four or five-page diatribes on ways to mutilate and destroy him."[12] Another often bashed male character was Wesley Crusher on Star Trek TNG, who was regarded by many as an egregious Gary Stu, to the point that the actor would be booed at conventions and a Usenet newsgroup called alt.wesley.crusher.die.die.die was created. 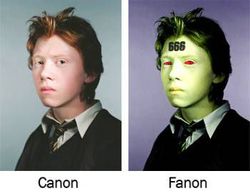 "The result of either turning a good canon character into a villain or making a villain significantly more evil than in canon is Ron the Death Eater, the inverse of Draco in Leather Pants."[13]

Some fandoms call this variant Anti-Fic. [2]

Character bashing frequently occurs when the hated character is seen as a threat to the fan's preferred ship, either as a third party in a love triangle, or a het love interest to one member of a slash or femslash pairing. One example in The X-Files is Mulder's ex Diana Fowley, for whom an Anti Diana Fowley Archive exists.[14] Pixychelle sends up this bashing cliche in her story How Severus Snape (Didn't) Kill Nymphadora Tonks: "...he learnt that the annoying twit had moved in on his werewolf while he was busy sacrificing for the war effort. Clearly, she needed to die."[15] However, ex-wives, (in The Sentinel, Die Hard IV, Star Trek (movie era), and Starsky & Hutch) who might be seen as less of a threat, are bashed as much or more than current canon girlfriends in those fandoms.

No character bashing stories. Character bashing includes, but is not limited to, making characters look bad because you think that they are a threat to your OTP or your favourite character; making characters look bad because you think it makes your favourite character look good in comparison; characters acting severely out of character - plotting murder, committing rape, beating the hell out of people - for no good reason that is explained in the story when there is no indication in canon that they would behave in such a way.[16]

Among fans, there is debate as to whether character bashing is a legitimate form of creative expression,[17] or whether it is sloppy writing.[18]

Notable Targets, past and present