Cho Chang is a character in the Harry Potter series best know for her brief relationship with Harry. 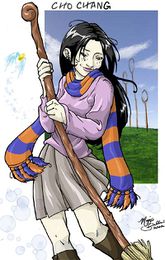 Cho was first introduced as a member of the Ravenclaw Quidditch team and Harry's first crush. In Goblet of Fire, she began a relationship with Cedric Diggory, who was murdered at the end of the year. In the subsequent book, she was clearly grieving for Cedric, but began to date Harry Potter. This drew criticism from many fans, as did the fact that Cho defended her friend Marietta after Marietta betrayed the D.A.

Cho was redeemed to many fans in the seventh book, when she returned to fight against Lord Voldemort in the Battle of Hogwarts.

J. K. Rowling stated in a post-Deathly Hallow interview that Cho went on to marry a Muggle. (Some femslash fans note that Rowling never specified whether that Muggle is a man.)[1]

Cho receives a surprising amount of hate from fandom as a whole. One Cho hatelisting had over 700 members.[2]

Cho is notable for being one of the only Asian characters in the Harry Potter series, and many fans identified with or idolized her, though some were disappointed with her characterization in the fifth book:

So I'm Asian, and I read a lot of books as a kid--a lot of fantasy books, in particular. None of them ever had any Asians in the story... unless you count the evil guys of strangely narrow-eyed-ethnicity. But then came Cho Chang. She was pretty and smart and athletic and HOLY CRAP HARRY POTTER EVEN HAD A CRUSH ON HER OMGOMG!!!!!!! Cho had all the potential to be every Asian girl's hero...

...but then she was lame. So thanks Rowling. Thanks for making the only Asian girl in books a weak crybaby and giving Harry to Ginny instead.[3]

Some also felt that Cho's name (which many fans have pointed out is made up of two surnames) and the fact that she is in Ravenclaw (the "clever person" House) was propagating Asian stereotypes.[4]

"To JK Rowling, from Cho Chang"

Discussions about Cho's ethnicity and role in the books were revived in April 2013 in response to a spoken-word poem called To JK Rowling, from Cho Chang, recorded at the finals of the CUPSI poetry competition.

Response to the poem: In Which I Talk About Why The Cho Chang Video Is Wrong / My two cents / My opinion / I’m really uncomfortable with the discussion going on / ...

The author of the poem responded to critiques in a YouTube video, and hosted a discussion of the poem on her Tumblr. 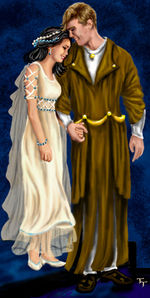 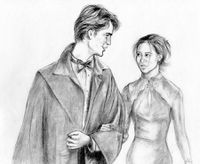 In fanworks, Cho is most often shipped with characters who she dated canonically, especially Harry and Cedric. She is also a fairly popular femslash character and is commonly paired with variety of female character. Popular pairings include: