Cedric Diggory is a character in the Harry Potter series and is a prominent Hufflepuff character.

Cedric Diggory is two years ahead of Harry at Hogwarts. He was in the Hufflepuff house and a popular character in his house. During his time at Hogwarts, he started dating Cho Chang. In Harry's fourth year and his sixth year, he was chosen as a Triwizard Champion. During the final task, he along with Harry is transported to a graveyard where Peter Pettigrew and a disembodied Voldemort are waiting. Pettigrew kills Cedric on Voldemort's orders, before forcing Harry to be part of a ritual to resurrect Voldemort's body. Cedric's death is taken badly by everyone - especially by people who wished to not believe Harry's tale that Voldemort was back.

Although Cedric Diggory is a fairly popular character in the Harry Potter fandom, there aren't many Cedric-centered fanfics. He is often just a side character.

Fanfiction about Cedric is often set during the Triwizard Tournament or ignores or fixes (e.g. with time travel) his death.

Given that Cedric is played by Robert Pattinson, the same actor as Edward Cullen in Twilight, there are a lot of memes and fanedits that are crossovers between both universes. 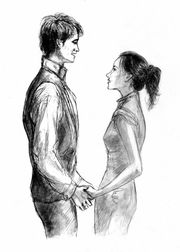 Cedric and Cho fanart by LittleSeaSparrow