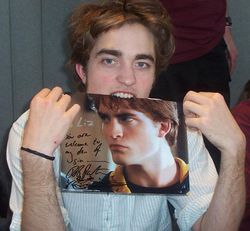 Robert Pattinson is an actor best known for portraying Edward Cullen in the Twilight films and Cedric Diggory in the Harry Potter films. He will portray Bruce Wayne in an upcoming Batman film.

Pattinson first came to fannish attention for his promotional appearances for the Harry Potter and the Goblet of Fire film. He endeared himself to fans with his generally unkempt appearance and ridiculousness during interviews.[1]