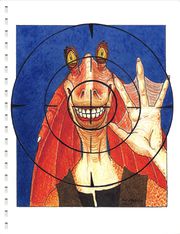 cover of I Don't Care What You Smell #8, a rare piece of fan art: the rifle target graphic represents this character's lack of appeal and downright hostility from many fans

Jar Jar Binks is a character in The Phantom Menace and, to a much lesser extent, Attack of the Clones. 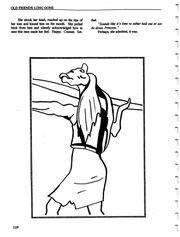 from the interior of Imperium #11, Sandra Scholes is the artist

"Jar Jar Binks was the first Gungan to represent his people in the Galactic Senate, first serving as a Junior Representative along with Senator Padmé Amidala, and then, after her death, serving as full Senator himself. Like most Gungans, Jar Jar was lanky and spoke Basic with a unique accent. Despite being naïve and clumsy, Jar Jar Binks contributed greatly to the fate of the Galactic Republic, both for good and ill. He was a General, Representative, and later a Senator." [1]

The fan-edited The Phantom Edit by Mike J. Nichols tinkered with nearly all scenes featuring Jar Jar Binks and removed some of what Nichols dubbed 'Jar Jar Antics.' [2]

Many fans felt that Jar Jar Binks was an example of racial caricature and were offended. They also felt that the inclusion of the character dumbed down the movie.

A viral Reddit post in 2015 posited that Jar Jar, "far from being simply the bumbling idiot he portrays himself as, is in fact a highly skilled force user in terms of martial ability and mind control" -- or rather, that Jar Jar was actually the main Sith villain in the Star Wars saga all along.[4]