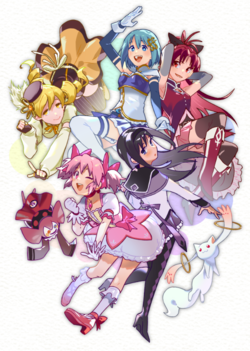 The creators and the fans may declare these various installments as being canon, official, paracanon, or non-canon to varying degrees. 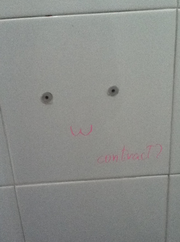 "Contract?" Art of Kyubey found in a university toilet.

The airdate for the last two-part finale was delayed after the 2011 Tōhoku earthquakes and tsunami in Japan; fans have commonly suggested the reasoning being that the final episodes bore some resemblance to the real-life disaster. Some fans online resented the delay, thinking it was unreasonable ("I don't agree that it's perfectly understandable - I mean, can't they just air the episode with a warning or something at the beginning?"), while other fans supported the decision ("It's just an anime, we can wait the extra months for the ending.") [1] [2]

Footage of the reactions of first-time viewers are popular on YouTube, particularly of the last few minutes of the third episode.

My first time watching Puella Magi Madoka Magica went a little something like this:

Episode 3: Yellow’s not evil after all, and now is the dead. My bad.

Episode 4: Pink getting all fucked up, SOMEONE SAVE BLUE!

Episode 7: FUCK YOU, BUNNYCAT! Red’s not so bad after all. But someone save Blue!

The fandom has a lot of fanart, much of which can be found on Pixiv or Tumblr. As of October 2020, there are over 200 thousand PMMM works on Pixiv alone.

The radio station Tokyo FM reported that Puella Magi Madoka Magica has developed into a social phenomenon in Japan.[3]

The series may act as a threshold fandom for introducing newbies to magical girl anime. However, because of its unconventional treatment of genre norms, Puella Magi Madoka Magica has attracted a wider audience than its counterparts, leading to controversy among long-time fans of magical girl series.

Don’t you hate it when a piece of media you like becomes popular for the wrong reasons?

If you haven’t watched Madoka Magica there’s two options: either you know nothing about it but your friends keep recommending it to you, possibly in between evil snickers, or all you know about it is that it looks cute but it’s secretly fucked up and edgy or “a SuBvErsiOn/DeCOnsTruCTion of the magical girl genre”.Anyone who has seen more than 2 magical girl shows can tell you that the genre is not nearly as flat and formulaic as everyone makes it up to be, so to some the popularity that Madoka gained simply by subverting the expectations of the people thinking it was another sailor moon ripoff is undeserved.

Thing is, Madoka Magica is legit one of my favorite animes of all time. I say that as someone who has other 3 magical girl shows in that particular list. So while I understand the complaints from the community I also think some of that hate is somewhat undeserved. It’s not the show’s fault that people on the internet don’t know how to sell it to others except by deriding the whole genre because they don’t respect it.
Tumblr post by shizukateal (Accessed October 26, 2020.)

Fans of the show fall into two major camps: those who appreciate Madoka's role as the hero of the story and those who believe Homura to be the true protagonist while Madoka herself remains largely passive.

Essentially, what Madoka does is just as heroic as any sword-wielding superhero who rescues humanity from some alien supervillain who threatens to take over the world. She doesn’t even have to point her weapon at the villains in order to bring about revolution, save countless people, and restore hope. You don’t have to be “badass” in order to be truly badass. You can have pink hair, wear a frilly dress, flaunt big ribbons, wield a rose-adorned weapon, and embody every trait associated with “stereotypical girlishness” that female warrior characters try to avoid, but still prove to be just as, if not even more, “badass”. Madoka accomplishes all of this with the incredible power of her hope and her ability to believe in that hope. She has hope in the world, she has hope in all magical girls, and she has hope in herself, because she is hope.
Tumblr post by littlepurinsesu, (Accessed October 26, 2020.

Aftermath of The Rebellion Story

Fans were split on the ending. Some people declared that Rebellion never happened and that it was the worst thing to happen to the anime, while others wholeheartedly embraced it. Some were upset by Homura's transformation into a villain.

Many fans came to the conclusion from its plot and implications that, from a fan perspective, the movie could serve as a deconstruction of fix fics in general. Some working on fanfics that address the ending of Rebellion; the irony of fixing a story that deconstructed the very nature of fix fics has not been lost on them.

A large volume of meta has been written about the series, particularly its skillful inversion of many popular tropes in the magical girl genre:

Then you've got darker series like MAI-hime and Puella Magi Madoka that take the premise and deliberately turn it on its ear: the girls don't triumph over evil through the power of friendship, they kill each other and die horribly; they aren't allies of justice like they (and the viewer!) thought, they're being used for evil.
Thread at Fail Fandomanon (Accessed April 6, 2011)

You know, someone posted some meta stuff the other day on fandomsecrets (yeah yeah I i know), regarding Puella Magi Madoka Magica and why they found the series' concept a little sexist. The idea (roughly phrased) is that the mahou shoujo genre represents a type of empowerment for young girls. However, when one deconstructs the genre as viciously as Madoka does, it carries the implication that empowering girls is a negative thing.
Thread at Fail Fandomanon (Accessed April 6, 2011)

Other fans focused on thematic elements within the show, such as the use of symbolism, repetition, allusions to classical literature (especially Faust), and the relationships between the characters.

Madoka is a story about wishes. To be more precise it is a story about people having to understand what they really want and which kind of wishes can help them reach happiness and a good outcome and which ones do not. This theme is clearly underlined by the worldbuilding since in order to become magical girls the characters have to make a wish and their powers and abilities are greatly influenced by that wish. The girls have to find something they wish so strongly they can dedicate their whole lives to it without regrets.

This theme is explored in several ways and these different prospectives are linked to secondary themes. Each secondary theme is illustrated by each girl’s subplot and they all come together in Homura and Madoka’s stories even if in different ways.

To be more precise I would say there are two main secondary themes.

1) Growing up and what it means which is introduced through Mami’s arc.

2) The importance of integrating opposites and to overcome a black and white vision of the world which is explored through Sayaka and Kyouko’s inverted arcs.
Tumblr post by aspoonfulofsugar (Accessed October 20, 2020.)

The fandom refers to the five main magical girls of the original series as the "Mitakihara Five" or the "Holy Quintet". In fan fiction, magical girls are often generally referred to as "puella(e) magi" by the narration or in the characters' dialogue. However, while "puella magi" appears as part of the series' title in several regions, magical girls are never referred to using that Latin term within canon proper.

Late in the show's run, it's revealed that a character is able to manipulate time. The implication that she had experienced several iterations of the same month led to fan fiction stories exploring these alternate timelines in which events unfolded differently, such as certain characters surviving or dying, the disruption of the status quo by an outside interference (often via a crossover), or femslash romance. Within the series, Homura was shown reliving the month at least five times, though fans generally agree that to be a fraction of what she went through; some fans will depict her as having experienced up to hundreds or thousands of resets.

After the show's two-part finale, many fan fics also focus on the implication of magical girls existing across all of history around the world, inspiring the creation of fan-made magical girls. Additionally, some fans create backstories for the various witches encountered within the series.

Post-canon fics often involve the return of Madoka and/or Sayaka, especially within Madoka/Homura and Sayaka/Kyōko fic; a similar plot was followed in the sequel movie The Rebellion Story, and fics following that canon will instead build upon its ending.

The fandom is also noteworthy for a high percentage of crossover fics on A03, most notably with Neon Genesis Evangelion and Bleach.[4]

The fandom is largely femslash focused, as the entirety of the major cast is female. The juggernaut pairings are Madoka/Homura and Kyōko/Sayaka, while other pairings have smaller followings. 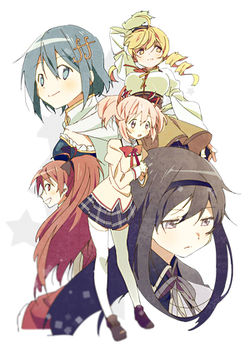 Translation Requests: Help! Editors need some assistance translating a source or text on this page.

There are fan-made covers of music from the series, [8] such as this Madoka pianoforte, and those sung by Paperblossom.