Doctor Jennifer Keller is the Chief Medical Officer of Atlantis. She took over from Carson Beckett after he died.

Jennifer Keller is from Chippewa Falls, Wisconsin. Her mother died a few years before she joined the Atlantis Expedition, and she has no other close family apart from her father. She graduated high school at the age of fifteen, and university before the age of 18. She was promoted to the position of Chief Medical Officer after the death of Carson Beckett.

Her new role in Atlantis, and challenges which she faced off-world, forced her to quickly gain confidence and experience. Keller was responsible for finding a cure to the terminal condition afflicting Carson Beckett's clone, allowing him to be freed from stasis. She also studied Wraith genetics, engineering a gene therapy that had the potential to remove a Wraith's ability to feed on humans.

Due to the young age at which she attended university, Keller was left out of many social activities and felt isolated and out of place (Quarantine). However, she was far from being a social recluse—she learned some bar betting games in order to earn free beer (Trio). She has also succeeded in forming relationships with people on Atlantis—she is friendly with Teyla Emmagan, and after the ordeal they both faced on New Athos, Keller enlisted Ronon Dex's help in learning how to spar.

After initially displaying a romantic interest in Ronon Dex, she later began a relationship with Rodney McKay. They were still dating as of the end of the fifth season. 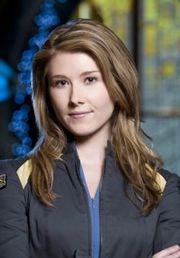 The character is played by actor Jewel Staite, well-known in fandom as one of the stars of Firefly.[1]

Reactions to Keller were mixed from her introduction on. Some fans were initially hostile, as she was replacing a generally well liked character in what some perceived as stunt-casting. Other fans were pleased by the casting and looked forward to having another female character in the cast, and a few Firefly fans began watching SGA particularly to see Jewel Staite in a new role.

Through the course of season 4 and especially season 5, fan opinions of Keller shifted, polarizing the fandom to an extent.[2] While some felt her to be a welcome addition, bringing a touch of normalcy to the larger-than-life cast,[3] others thought her character was handled poorly.[4] Some fans considered Keller to be a Mary Sue variant, getting extra screentime because the writers/producers liked the actor, at the expense of the other characters.[5] In addition, the burgeoning romance between her and Rodney McKay was suspected by some to be TPTB's attempt to deflect a queer reading of the popular McKay/Sheppard pairing, and others found the very existence of a canon ship frustrating, as SGA had not had a focus on romance in previous seasons. McKay dating Katie Brown earlier was similarly unpopular and that relationship had less screen time because it was with a minor character.

Some SGA fans who had reservations about her character nevertheless were taken aback by the character bashing that occurred in some communities, and the bashers were accused of misogyny on occasion. Additionally, some fans who liked Keller herself disliked the McKay/Keller pairing, because they disliked romance in the show, because it broke up their OTP, or because they liked Ronon/Keller. As McKeller became canonical, some McKeller shippers felt the bashing was ubiquitous and intentionally discouraging fans of the pairing and even the background inclusion of the pairing in gen stories:

[...] people comment like that on fanwork that contains McKeller All. The. Time. All the fucking time. [...] You know what all this looks like to me? Like a discouraging tactic, to actively discourage people from including any hint of Keller or Rodney/Jennifer in their fanwork at all.[6]

Keller frequently appears in gen fiction, either as a main character or in a supporting role. Some femslash stories also feature her. According to the sga_newsletter, in this genre she is most often paired with Laura Cadman, Teyla Emmagan or Alicia Vega.[7]

However, when Keller is written as being in a relationship, it is most commonly a het one. She is most frequently paired with Ronon Dex, more than twice as often, according to sga_newsletter statistics, than the canonical pairing of McKay/Keller. [8]