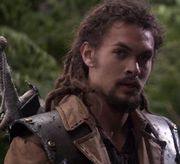 Originally a soldier on Sateda (a planet in the Pegasus Galaxy), Ronon Dex is now a member of the Atlantis expedition's first contact team. He is a skilled fighter and tracker, and has extensive knowledge of Pegasus planets and cultures.

Ronon is played by Jason Momoa

Ronon Dex was an elite soldier with the rank of 'Specialist' on his homeworld. He defended it during a devastating Wraith culling, but was unable to fight off the assault. Almost the entire population of Sateda was killed, along with Ronon's wife Melena. He himself was captured by the Wraith. Instead of feeding on him, the Wraith made him into a Runner—they implanted a transmitted in his back and released him, hunting him across many worlds as a means of sport and/or training. Thanks to his skills and intelligence, Ronon survived as a Runner for seven years.

When the Atlantis expedition travelled to P3M-736, searching for Aiden Ford, Ronon captured Teyla Emmagan and John Sheppard. They offered to help him, and Carson Beckett operated on Ronon to remove the Wraith tracking device. Ronon returned to Atlantis with them, where he learned that the Wraith had destroyed Sateda; he therefore opted to stay in Atlantis.

Ronon is distinguished by the depths of his loyalty to his team, and by the emphasis he puts on the fight against the Wraith. Defeating them is his highest priority, even if it means putting himself at risk of death. Normally controlled and laid back, he becomes impulsive when he or a team member is threatened by a Wraith.

The canonical AUs were frequently focused on John Sheppard and Rodney McKay, so Ronon and Teyla Emmagan were rarely seen. There were some references to them, however.

Ronon's background prior to joining the Atlantis expedition is not well fleshed-out in canon; fan authors have taken the opportunity to expand on it and invent details of his family life, his military service, his prior romantic/sexual relationships. There are many competing backstories for Ronon in fanfiction, but none that have reached the level of widely accepted fanon.

Ronon is sometimes spelled "Ronan." Ronon introduces himself as "Specialist Ronon Dex," but this rank is rarely referenced and never explained in canon. Possibly because of this probably military ranking, early fics with Ronon sometimes called him by his last name in narration, or had Sheppard calling him such, the same as Sheppard addresses Earth military members.[1] Canonically, Ronon is never addressed or referred to as only "Dex," but fanfic and pairing names will use it on occasion.

Like Teyla, Ronon's character has been both the impetus and the flashpoint for fannish discussions of race and racism. (Jason Momoa is a person of color; his ethnic background is Hawaiian.) There have been criticisms of the show itself for using the most conventional scifi media tropes, and casting people of color to indicate cultural or biological alienness. There have also been discussions and disagreements regarding the portrayal, or lack of portrayals, of Ronon as a character in fanfiction.

The replacement of Aiden Ford with Ronon was painless for some, problematic for others. Before Ford, the Stargate franchise had not had a very good record as far as casting actors of color as anything but alien Others. (Despite the fact that Stargate SG-1 ran for ten years, the only person of color in the regular cast who ever played an Earth-human character was Lexa Doig as Carolyn Lam. The character only appeared in eleven episodes.)

Because Ford was a rare exception as a person of color playing a normal, not-Othered human being, some fans were displeased with the storyline which removed Ford from the show, transforming him into an angry, out of control junkie who later resurfaced as a violent, aggressive gang leader. Replacing one of Stargate's rare "normal human" characters of color with a character who could be seen as a stereotypical savage warrior was also not seen as a positive development. Some fans disliked these developments so much that they stopped watching,[2] while others grew to appreciate the parts of Ronon's character that transcended the stereotypical aspects of his initial introduction.

"Ronon sparkles" is a reference to the vid Another Sunday by Jescaflowne, and fans may occasionally shout this out whenever he appears on-screen, or mention it in recaps. Because of this vid, many fans consider Ronon to be the sparkliest member of the team.

Initially, Ronon was mostly paired in het fanfic with either Teyla Emmagan or Elizabeth Weir. For some time in Season 5, Ronon demonstrated an attraction to Jennifer Keller. The episode Quarantine hinted at the possibility of a relationship between Ronon and Jennifer Keller, which appealed to a number of fans, many of whom were disappointed when it never came to pass in canon. In fanfic it continues, however. The final episode of the show, Enemy at the Gate, appears to show the tentative beginnings of a relationship between Ronon and Amelia Banks.

Ronon's character was an immediate hit with many slash fans, and he was paired off with many other characters such as [[Carson Beckett] in Androcles and the Lion be for settling into two primary relationships: one for those who liked John Sheppard but did not like to pair him with Rodney McKay and one for those that liked Rodney but preferred not to pair him with John. Several stories were written by new-to-SGA authors Bone and Destina, amongst others, dealing with a John/Ronon during early Season 2. However, the pairing never got much fannish momentum behind it, and the pairing remains a small one.

While Rodney is the teammate Ronon has the least interactions with in canon, the opposites-attract nature of this pairing attracted some fans as the show -- and the fandom -- progressed. Lingual by Nestra was posted in late August, 2005 and is one of the first Rodney/Ronon stories. Hth wrote multiple stories featuring the pairing, as well as a long Ronon/Rodney/John series.

The boundaries between gen teamfic and fic dealing with a polyamorous relationship between the team members are somewhat mutable.