Needs Less Canon: This article includes too much canon detail for the amount of fannish content given. Please add fannish context or remove unneeded trivia. Although a brief overview of canon is welcome, the focus of every page should be about the fandom; canon details are important if they can be associated with a particular fannish activity, fanwork, or fannish event. See What Fanlore is not for more information.

The Wraith are an alien species on the television show Stargate Atlantis. They appear humanoid for the most part, but live in hives with an insect-like hierarchy led by a queen. The Wraith feed on humans in the Pegasus Galaxy in a process which subjects the human victims to immediate, extremely accelerated aging. The Wraith see humans as food; attempts to bargain with them are either ignored or met with contempt.

It should be noted here that LTC John Sheppard has an odd habit of giving Wraith (captives or otherwise) common American names. This explains the unusual American names of some Wraith characters. 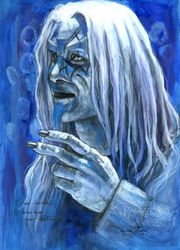 The Wraith in Fanfiction

The Wraith often function merely as foils or reasons for H/C fic, of course, but occasionally writers use them in light-hearted ways.[8]

Todd the Wraith, because of the character development which has been written by TPTB over Seasons 4 and 5 and his special relationship with John Sheppard, has been a particular favorite of fanfic writers and he regularly appears as a minor character, especially in post-season-5 fic and sometimes in AUs.

Wraith-pairing fic is relatively rare, but the most common pairings in it are probably Michael/Teyla and Sheppard/Todd, as well as some John/Teyla fic that focus on Teyla as a Wraith queen.[9]

Besides fanfic with "plain" Wraith there also exist fanfic that explores Wraith becoming human or transforms human characters into Wraith, partly inspired by the retrovirus storylines.[10]

Several writers were unsatisfied with what little canon provided of Wraith society and created their own versions: notable examples are Unnatural Selection by auburn, Permutationality by sardonicsmiley and the Lantean Legacy tie-in novels.

Some fans enjoy asserting that Colonel Sheppard assigns the Wraith names from his internal list of ex-boyfriends. (Need citation.)

Prompted partly by the Michael storyline, fans have questioned the ethics of the expedition's actions regarding the Wraith and Michael in particular. They have also discussed whether seeking to wipe them out could be considered genocide. (needs citation)