Unnatural Selection is a Gateverse AU story by auburn. It uses the basic premise of Stargate Universe, but the main characters of Stargate Atlantis (with quite different backstories, however). It was written for the Atlantis Big Bang 2010 and widely praised especially for its worldbuilding and characters.

Summary: Human error, operant conditioning, survival instinct and evolution as horror. An examination of the SGC's failure to anticipate and prevent the losses of Atlantis and the Alterran survey ship Destiny. One year after the first, the second Earth Expedition to Wraith-occupied Atlantis is diverted to the Ancient ship Destiny, struggling to survive with no way home and enemies within, while John Sheppard, considered a traitor by everyone who once knew him, tries to hold onto what humanity he has left and save them all.

Three artists created artwork for the story during the challenge: davincis_girl made a banner and an illustration, sian1359 a frontispiece, and mashimero created four pieces of art.

The author also provided two fanmixes to the story (link).

Many SGA fans were not happy that their show was cancelled and replaced by SGU, and many who watched the new show were less than impressed. (See the Stargate Universe page for more details.) During that time, in February 2010 cesare wrote a post with detailed thoughts about a SGA/SGU fusion.[1] auburn asked for permission to write the story and later posted further backstory notes on her journal.[2]

These two posts already have comments mentioning that this AU would be a better version of SGU, an opinion that appears quite often in recs and reviews of the finished story:

"Somewhere, the showrunners of Stargate: Universe feel as if their asses have been thoroughly kicked, and handed to them, and then kicked again, and they don't even know why. ... This really feels like Stargate Universe, limitless and open to unimaginable possibilities."[3]

"The creators of SGU are SO green with envy right now. This is the dystopic creation they wish that they could have come up with for Destiny. *evil grin*"[4]

"On one hand, I'm so happy you developed all the characters so well and took the time to give characters that were pretty flat in canon (like Larrin and Ladon Radim) real believable cultures and backstory. On the other, this fic makes me so sad about SGU because it's so much more gripping, well-done, and just plain interesting than the show is. If SGU had played out like this, I would be waiting with bated breath for each upcoming episode."[5] 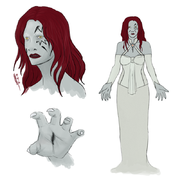 auburn invented a detailed version of Wraith society, biology, sexuality, and even language that differs from fanon. For example, Todd is a larval form and eventually transforms into a Queen. Queens are able to change humans into hybrids, a procedure called the nasce, and create their own hive ships.

In the hybrids' or Todd's POV the story uses Wraith language, most often Wraith gender pronouns.[6]